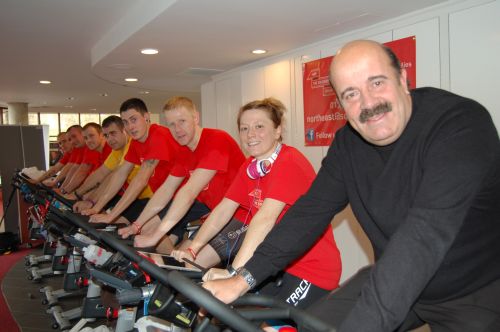 The soldiers from the Regiment’s Light Aid Detachment will be cycling an average of 100 miles a day on static cycles aiming to achieve a total of 5098 miles (8206 Kilometres) over five days. The distance is from the Snooker International Championships in Chengdu, China to the UK Championship in York.

“I am full of admiration for these guys and I realise they have another three or 4,000 miles to go but I have a sweat on just watching them,” said Willie, a TV and radio commentator for all major snooker championships including the World Snooker Championship..

Willie Thorne was a regular in the Top 16 World Ranking players for over a decade and is one of the top record breakers for the highest number of 147 breaks in the history of snooker (190), earning him his nickname "Mr Maximum".

“The Light Aid Detachment wanted to organise a charity event for these two worthwhile causes and as we are interested in Snooker and cycling decided to do a charity cycle at the York Barbican,” said Corporal Daniel Custus, the organiser.

“It has been great for Willie, who is a legend in Snooker, to come and cycle a couple of kilometres to support us – we have really appreciated it.”

The Light Aid Detachment is based in Imphal Barracks in Fulford York and maintains and repairs all kinds of mechanical equipment from weapons and Land Rovers to Signals equipment.