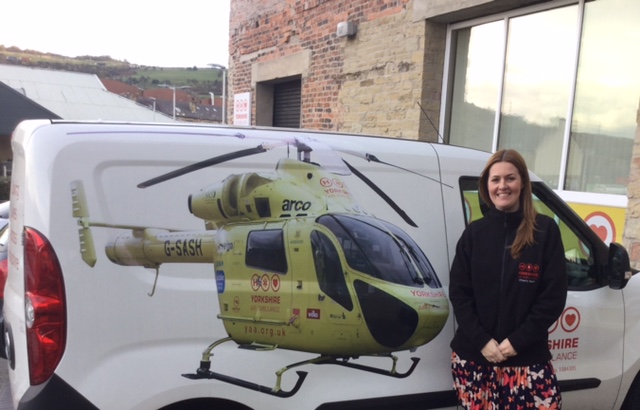 The 36-year-old held a similar role with the rapid response emergency charity for three years before leaving to have a family in 2008.

Sam has returned to help deliver a fundraising and volunteer drive across South Yorkshire. “With Sheffield’s Northern General Hospital getting its own helipad next year it is likely that our work will increase even more in South Yorkshire.

“So we want to make it as easy as possible for local people to get behind the charity and support us. Because we never door knock, cold call or door-to-door recycle we need more volunteers on the ground who can attend community events, man information stalls or give talks.”

"Being a volunteer is a really great way to get out and about in your local area and meet people. You would be part of a fantastic team and you can do as little or as much as you want, to fit in with your lifestyle.”

Sam, from Penistone, is now the proud Mum of two children and knows at first hand how important raid response emergency services are.

Her six-year-old daughter Libby nearly died at birth after her umbilical cord ruptured. After an emergency caesarean, the newborn was rushed from Barnsley to specialists at Jessop Hospital, Sheffield, by the neonatal and paediatric retrieval service Embrace.

Yorkshire Air Ambulance partners with the Embrace team often quickly moving specialist medical teams and equipment to their sickest patients across the region.

Sam, said: “We as a family are only too aware of the difference that services like the air ambulance can make.

“I worked part-time for Barnsley Hospice and the Sick Children’s Trust after Libby recovered and now I feel the time is right to come back and to use my experience to really make a difference.

“In the last seven years the charity has really grown in terms of its profile, its workload and the income needed to keep the two helicopters flying but the key message about what we do and why has not changed.”

Yorkshire Air Ambulance serves 5million people across Yorkshire and has carried more than 6,300 people in its 15-year history.

The independent charity needs to raise £12,000 each day to keep its two helicopters in the air and flying, which is equivalent to £4.4 million a year.

The YAA is looking for individuals, couples or small groups of friends to join their friendly team of volunteers in South Yorkshire. There are many ways you can get involved, including helping to run the YAA stalls at local events or even raise awareness of the work of the YAA by speaking at small events.

You would need to have access to your own vehicle and be able to independently collect a gazebo, merchandise and other equipment as well as set up, run and pack up the stall.

If you would like to find out more about becoming a South Yorkshire volunteer for Yorkshire Air Ambulance contact Sam on 07768 175727 or email her on s.silverwood@yaa.org.uk.