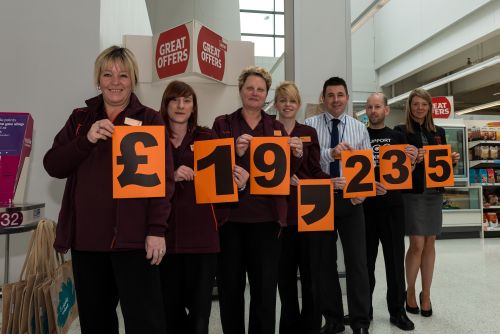 Two year’s worth of fundraising and awareness support from Sainsbury’s Wakefield Trinity Walk has made a huge difference to the staff at Yorkshire Air Ambulance. Thanks to generous donations from customers, the store has announced they have raised £19,235.35 in total. On 2nd June, colleagues from the store, including PR Ambassador Steve Scriven will be meeting the charity members at the Trinity Walk Store to celebrate the successful partnership. It’s been an amazing two years for the charity after they entered Sainsbury’s Trinity Walk’s Local Charity voting process back in May 2012. For the last five years, the retailer gives customers nationwide the chance to vote for their favourite Local Charity, to be considered to receive support from their nearby Sainsbury’s store. When the charity were announced as Sainsbury’s trinity Walk’s new Local Charity partner, Kerry Garner, Regional fundraiser, for Yorkshire Air Ambulance said “The continued support over the last 2 years from Sainsbury’s Trinity Walk has been phenomenal. We cannot thank the staff and shoppers enough for raising such an amazing amount, the money raised will ensure we can continue to save lives across Yorkshire. It may surprise many people that the Yorkshire Air Ambulance is a Charity that relies solely on the generosity of individuals and organisations to help save lives across Yorkshire. To keep both of our helicopters in the air we need to raise £9990 every day. This is equivalent to £3.6 million per year, so the support from businesses and individuals is invaluable and greatly appreciated by everyone here at the YAA” Throughout the last 2 years, colleagues at the store held several activities to raise funds and awareness of the charity’s cause. These included Bag Pack’s Quiz Nights and Bucket collections which helped the Air Ambulance. Despite the partnership coming to a close, it doesn’t mean that the charity will now be forgotten, as Store Manager Sean Higgins explains: “Our colleagues have really enjoyed working with the Yorkshire Air Ambulance and it’s certainly touched the hearts of many of them that before didn’t necessary have a direct link to them. We know what an important part they play in the community and we hope the partnership has helped remind our customers of the valuable service they provide in Yorkshire. Thanks to the partnership, we’ll certainly now be looking into ways we can support them in the future”. Customers now have the chance to vote for a Local Charity to be Sainsbury’s Trinity Walk’s new Local Charity Partner. Voting takes place from 28th May to 8th June, while customers can also vote online from 28th May by going to www.sainsburys.co.uk/localcharity. A shortlist of nominations will be drawn up after the closing date and the store’s colleagues will then invite the three charities that they feel best fit the needs of the community into store to talk about how Sainsbury’s can support them. The chosen charity will be selected based on the reasons given and the store will announce their chosen charity in July.