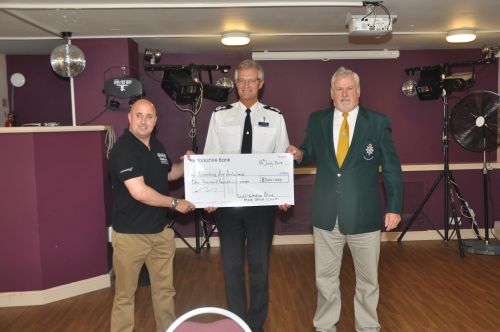 A music concert held by officers from South Yorkshire Police has raised £1000 for the Yorkshire Air Ambulance charity.

The concert, held at Hall Cross Academy in Doncaster in May, featured the South Yorkshire Police Male Voice Choir and Band.

At a presentation dinner in Doncaster on Wednesday 16 July, Chief Constable David Crompton presented David Townend, a volunteer representative from the Yorkshire Air Ambulance, a cheque for the money raised.

Chief Constable David Crompton of South Yorkshire Police / Malcolm Briggs, secretary of the choir, said: “We were delighted to take part in this concert and raise money for such a worthy cause.

“Police officers regularly work alongside the Yorkshire Air Ambulance, which provides vital support and assistance to emergency services across the region.”