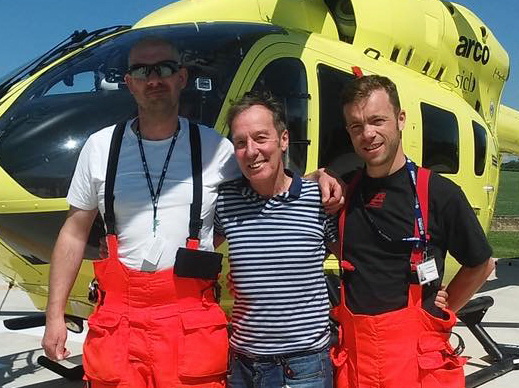 The actor suffered multiple injuries and a cardiac arrest after the crash on the A59 near Skipton last September.

Martin was returning to York on his bike after visiting a friend in Keswick when a car pulled out of a side road in front of him.

Martin stopped breathing but was successfully revived by paramedics before being airlifted to Leeds General Infirmary where he was placed in an induced coma for several days.

The 61-year-old spent over two months in hospital before starting a long physical and psychological recuperation.

During a visit to Yorkshire Air Ambulance’s air base at Nostell, near Wakefield, Martin met the two paramedics who treated him at the scene.

“The fact that I’ve survived is a miracle. If I had not got immediate care at the roadside and then flown so quickly to hospital I don’t think I would have made it.

“Meeting the people who actually saved my life was one of the greatest days of my life,” said the father-of-two.

“It was very emotional and they could not believe that I had come through. Apparently, the survival rate for someone who punctures both lungs is just one percent and I also stopped breathing for quite a long time.”

Abby McClymont of the YAA added “We were delighted to be able to welcome Martin to Nostell to see first-hand the work we do and what will have happened on the day of his accident.

“It’s remarkable to hear Martin’s story and how ill he was, but to see him now looking so well is fantastic.  We are glad we were able to help Martin in his time of need.”

The rapid response emergency service serves 5million people and carries out over 1,250 missions every year. It needs to raise £12,000 every day to keep flying and has just replaced its two, ageing aircraft with brand new, state-of-the-art Airbus H145 helicopters.

Martin is back at work having recently finished a run playing the Lord Mayor of Hull in a production of The Hypocrite for the Hull Truck Theatre Company and Royal Shakespeare Company.

After missing last year’s panto at York Theatre Royal, he will be back this year and is sure to receive a rapturous reception from audiences.