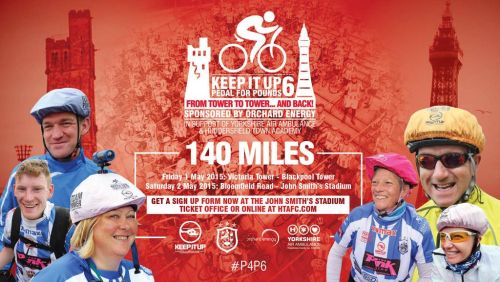 It’s time to get back on your bike as Huddersfield Town has today announced that the sixth annual ‘Pedal for Pounds’ bike ride, sponsored by club partner Orchard Energy, is a go!

The two day ride will start at Victoria Tower on Castle Hill in Almondbury at 10am on Friday 1 May 2015, with that day finishing 70 miles away at Blackpool Tower.

On Saturday 2 May 2015, after the Terriers’ final game of the Sky Bet Championship season against the Seasiders, the ride will set off from the Bloomfield Road Stadium and cycle back to the John Smith’s Stadium in Huddersfield.

The ride will be 140 miles in total and will see supporters and staff raising funds for the ‘Keep It Up’ campaign, the Club’s fundraising partnership between the Yorkshire Air Ambulance and the Huddersfield Town Academy.

“The last game of the season is always a really exciting one and it will be great having the cyclists descending en masse over the Pennines to Blackpool for the sixth annual ride!

“The ‘Pedal for Pounds’ bike rides have taken on a life of their own and we want as many Town fans as possible to be able to have the experience of taking part. We appreciate that not everyone can commit to four days off work or stay away from their families for a prolonged period, which is why this year’s ride is over two days. It’s something a bit different to what we’ve done before but it’s still 70 miles per day, which is a real challenge.

“I would urge anyone who may have thought about taking part in the past to bite the bullet and go for it; you won’t regret it!”

Orchard Group Managing Director Gareth Henderson said he was “extremely proud” that Orchard would be stepping up its support for Pedal for Pounds this time around to become the title sponsor of the event.

“This is a fantastic charity event that brings Huddersfield Town supporters together and raises an incredible amount of money every year.

“I would urge as many people as possible to get involved. As a Pedal for Pounds veteran I know just how much of a challenge it is for everyone who takes part but when the going gets tough, the team spirit and the knowledge that every penny raised is making a real difference make it all worthwhile.”

If you would like to take part in the ‘Pedal for Pounds 6’ bike ride, please download a sign-up form and medical form from:http://bit.ly/13MiV7E and return both, along with your £35 registration fee (non-refundable; covers ride cycling jersey, bike and bag tags, ride insurance, ‘I Completed’ t-shirt and water, sandwich and snacks on both days).

Forms can be posted FAO Robyn Deegan, HTAFC, the John Smith’s Stadium, Huddersfield, HD1 6PX or handed in at main reception or the Ticket Office windows. Cheques should be made out to the ‘Keep It Up’ campaign.

The Club’s previous ‘Pedal for Pounds’ bike rides have contributed over £750,000 to the £1million raised for the campaign so far since its inception in 2009.