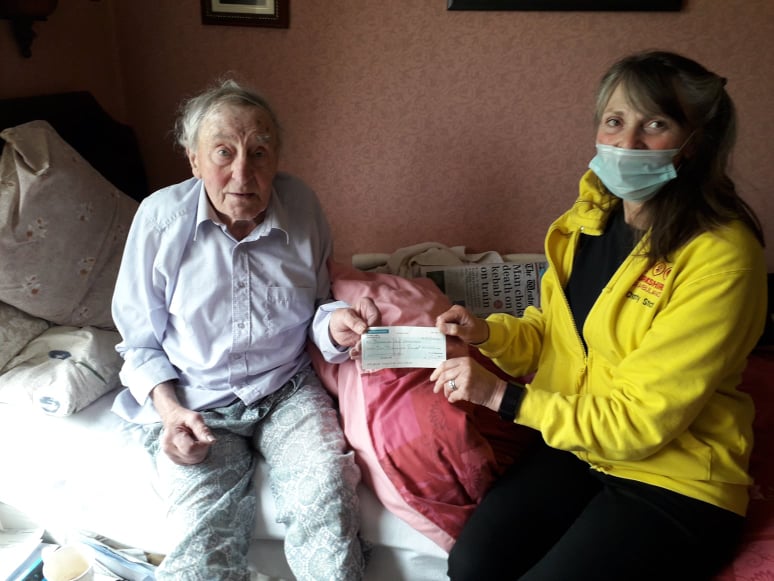 A North Yorkshire farmer who was rescued by Yorkshire Air Ambulance earlier this year after being trapped against a gate by his own tractor has donated £10,000 to the life-saving charity.

Yorkshire Air Ambulance (YAA) is a life-saving rapid response charity serving 5 million people across 4 million acres of Yorkshire and carries out over 1,300 missions every year. The Charity operates two state-of-the-art Airbus H-145 helicopters and needs to raise £12,000 every day to keep saving lives.

On 11th February 2021, farmer George Houghton, 84, was carrying bales when his tractor rolled forward and pinned him against a gate post. As it veered towards him, it also ran over his right leg.

George laid trapped for almost an hour and couldn’t breathe as the front wheel was wedged behind his shoulder. Luckily, George had his phone on him and was able to call 999 and alert the emergency services.

Yorkshire Air Ambulance initially dispatched their Topcliffe aircraft with two of their HEMS Critical Care Paramedics, but once the extent of George’s injuries were revealed, they dispatched a second aircraft with a Critical  Care Doctor on board to administer powerful analgesia.

Yorkshire Air Ambulance crew assessed George and he was flown to Preston Royal Hospital for further treatment. He was rushed immediately for surgery on his right leg.

George has since returned home for recuperation, however, he is still under the care of the team at Preston Royal Hospital and is due to have further plastic surgery on his leg later this year.

The money donated to Yorkshire Air Ambulance is on behalf of his late wife Betty and his children, Paul, Richard and Maxine. Speaking of his donation, George said:” I hope this donation will help to save other lives as I wouldn’t like them to have the pain that I have been through. No one knows if they will be the next victim.”

Linda Stead, North Yorkshire Regional Fundraiser, said: “We would like to thank George for his very generous donation to Yorkshire Air Ambulance. The £10,000 donated will help many other major trauma victims like George receive the best rapid response care that we provide.

It costs £12,000 a day to keep both of Yorkshire’s air ambulances maintained and in the air and support such as George’s is the life-blood of our Charity.”

George’s accident will also feature on the hit TV series Helicopter ER, which follows the day to day work of the YAA, later this year.