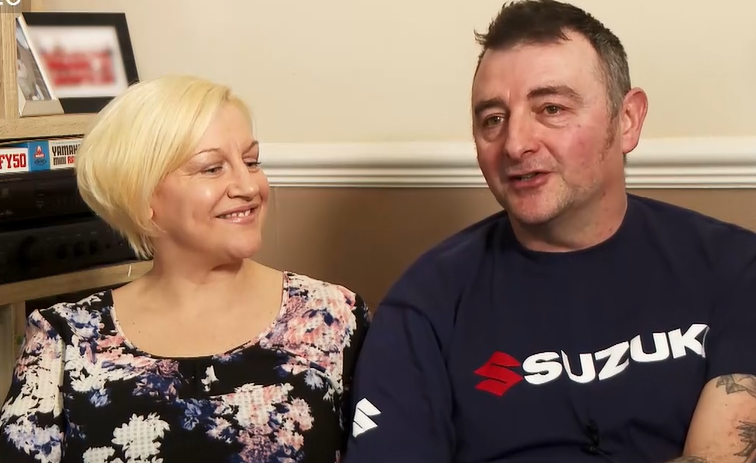 A newlywed couple from Doncaster are lucky to be alive following a horrific motorbike accident just days before their first wedding anniversary.

Ian Werret, 52, and his wife Clare, 44 were on a bike ride in the Selby area, when Ian was overtaking a car turning off a motorway, resulting in the collision.

Ian and Clare were flung from the back of the motorbike and ended up lying 10 yards away from each other on a grass verge.

Clare said: “I remember being on the bike, then being in the air and then I woke up on the grass – I must have passed out. “

With the Yorkshire Air Ambulance in attendance, it was down to the paramedics on board to assess the severity of both parties injuries.  Subsequently, Ian was flown to the Major Trauma Centre at Leeds General Infirmary as he was deemed the most seriously injured of the two, and Clare was taken by land ambulance to Pinderfields Hospital in Wakefield.

Clare continued: “I remember the air ambulance crew checking over my knee and I didn’t know how Ian was. Then I overheard that his stats were dropping and he needed to be airlifted.”

Assessments at Leeds General Infirmary revealed that Ian had cracked two vertebrae, nine broken ribs,  fractured his shoulder and had two collapsed lungs. Clare suffered from leg injuries, a broken rib  and also a collapsed lung. They both went on to make a good recovery considering their injuries.

Despite their horrific accident, biker of 37 years Ian, has not been put off riding. As soon as they returned home from hospital, his first priority was to assess the damage of his prized bike.

The couple returned home just in time to celebrate their first wedding anniversary together, recovering on the sofa – it wasn’t quite the celebrations they both had in mind.

Ian and Clare’s story will feature in episode 10 of Helicopter ER. Helicopter ER, which airs at 9pm on UKTV’s real life channel Really, also features a woman who accidentally stabbed herself with a knife, a man who fell two storeys at a local post office and a child who had a serious fall in a North Yorkshire woods.