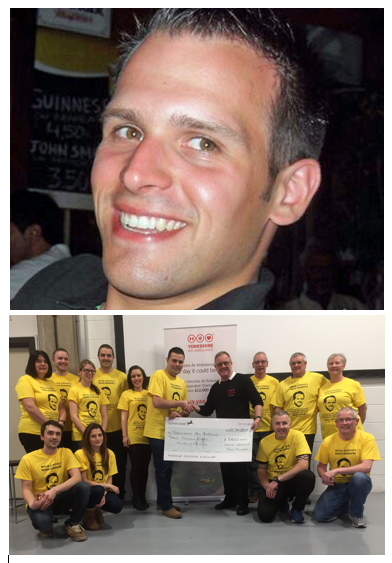 Road policing officer PC Russ Wylie was on routine patrol with a colleague near Burstwick, East Yorkshire, two years ago when his motorbike collided with a car on a bend.

The popular 28-year-old, who was engaged to be married, was airlifted to hospital by Yorkshire Air Ambulance but tragically died from his injuries the following day.

Since PC Wylie’s death, friends and police colleagues have organised a range of fund raising events and made donations through a special Police Federation JustGiving Page.

“We have been very moved and touched by how many people have made donations in Russ’s memory – from friends and colleagues, but also people who did not even know him.

“There have been 890 separate donations on the Police Federation Just Giving page – including a police motorcyclist in the Cayman Islands and the daughter of a policeman killed on duty in America.”

PC Wylie, who attended school in Melton, near Hull, had moved from Brough to Grimsby shortly before his death to live with his fiancée Roxanne Hennebery.

with 13 others including Roxanne, raised nearly £4,000 for Yorkshire Air Ambulance after tackling the gruelling 43-mile-mile Keswick to Barrow race in the Lake District.

Ben, a retained fire fighter and engineer at BAE Systems in Brough, added: “Russ and I had been great friends since primary school. He was a funny, kind and caring person – just a great bloke – and his loss has impacted everyone that knew him.

“As a Firefighter, I’ve worked alongside the Air Ambulance on a few occasions and witnessed the great work they do. We wanted to take on the Keswick to Barrow challenge to raise money for this great charity in memory of our dear friend.”

Yorkshire Air Ambulance serves 5million people across Yorkshire and carries out over 1,250 missions every year. It needs to raise £12,000 every day and has just replaced its two, ageing aircraft with brand new, state-of-the-art Airbus H145 helicopters.

David Hebden, Community Fundraiser for the YAA, added: “Russ’s family and friends have been a real inspiration since his tragic passing.  The strength they have found from each other to fundraise in his

memory is commendable and we are extremely grateful to everyone for their generous support.”