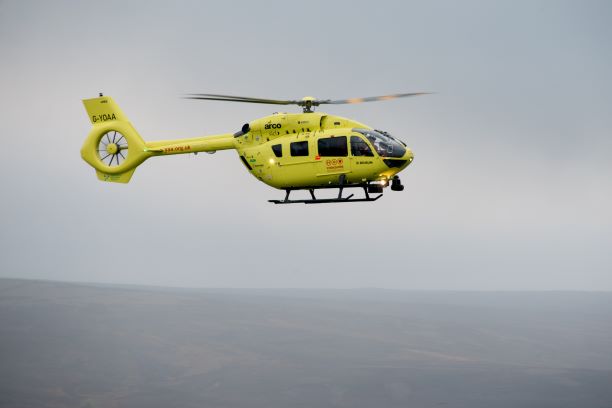 The Yorkshire Air Ambulance (YAA) can confirm that last night (11.09.19), en route back to their Nostell Air Support Unit from completing a mission the crew of HM98 (G-YAAC) were subject to a near miss with a drone.

The incident happened around 6.50pm as the helicopter was returning to base, flying at around 1,300ft

Steve Waudby, Chief Pilot commented “We cannot stress enough the seriousness of what happened last night to the crew of HM98.  It was only due to the vigilance of our front seat paramedic spotting the drone, and the rapid reaction of our Pilot that the crew avoided a direct collision.  It is estimated that they missed the drone by less than 3 meters in the end.  The consequences don’t bare thinking about if a direct strike had occurred.  We’d be telling a very different story today if it had.”

Steve continues “The most ironic thing about all of this is that we spent most of yesterday working with the Civil Aviation Authority (CAA) over at Nostell to help them create a new ‘Drone Awareness’ short film to help highlight the dangers & issues of operating drones, and to make users more aware of aircraft operators like us and the Police.”

“Whoever was operating this drone was doing so at an illegal height – the maximum height it should have been operating at was 120m or 400ft, so as you can see, this drone was flying over 3 times the height it should have been at.  Whether the operator is aware or not, they have put the lives of our crew in extreme danger. I would appeal to the operator to please come forward and identify themselves – we have a very clear description of what the drone looked like and it was very, very distinctive.  The police have been made aware, as well as the CAA and the AAIB have also been notified.  Again, I cannot stress the seriousness of what has happened.”

Peter Sunderland, Chairman of the YAA added “Firstly I would like to pay tribute to our Pilot – his prompt and professional actions avoided the most unthinkable disaster.  We are proud to have a team of highly skilled, ex-military Pilots as part of our team, and last night’s incident just goes to highlight how important these professional Pilots are to the Charity.  Also to the two paramedics and Doctor who were on board – all of their intense training over the years came to fruition last night and I am proud of how they handled this incident.  The crew are obviously shaken from what happened and we will be supporting them in any way we can.”

A CAA spokesperson said: “It is against the law to fly a drone above 400ft (120m) or close to airports without permission and anyone flouting the rules can face severe penalties including up to five years in prison. Anyone operating a drone must do so responsibly and observe all relevant rules and regulations. The rules for flying drones are designed to keep all airspace users safe.   The CAA’s Dronecode provides advice on how to fly your drone safely and follow the rules. You can access it at www.dronesafe.uk ”

Yorkshire Air Ambulance (YAA) serves 5million people across Yorkshire and carries out over 1,500 missions every year. The charity operates two, state-of-the-art Airbus H145 helicopters and needs to raise £12,000 every day to keep saving lives.  The Charity are currently featuring in the television documentary series Helicopter ER, which airs on channel Really every Monday night at 9pm.