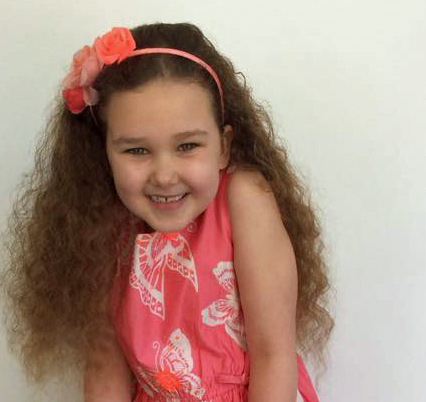 He is part of a 12-strong group climbing the 12 highest peaks in the UK and Ireland in 12 months to raise money for the rapid response emergency charity.

Last June Rob’s then five year-old daughter Georgia suffered serious head injuries after falling from her horse following a riding lesson near the family home in Steeton, near Keighley.

Luckily Mum Danielle, a paediatric Sister, was on hand to provide immediate first aid. Yorkshire Air Ambulance paramedics were soon on scene, and Georgia was flown in minutes to the specialist trauma team at Leeds General Infirmary.

“She had just had a lesson and then something spooked the horse and Georgia’s foot got caught in the stirrup and she got dragged along,” said Rob, 42.

“Her head repeatedly hit the ground and she suffered an open skull fracture and lots of tiny repetitive bleeds in the brain.

“She was put into an induced coma and the first couple of days were touch and go. But because she got immediate first aid from my wife, and the air ambulance got her to the right hospital in minutes, she made it.”

Georgia was in hospital for over a week, but has thankfully fully recovered. Grateful Rob added: “It doesn’t bear thinking about what would have happened if Danielle had not been there and she had had to make the journey to hospital by road ambulance.”

Rob, managing director of credit control agency Corporate and Commercial, is a keen walker and has now teamed up with other local businessmen to raise money for the Yorkshire Air Ambulance.

They have so far scaled 8 out of the 12 highest peaks – many in appalling weather – and crossed off Scotland’s Ben Nevis last weekend.

The idea for the challenge came from Steve Burles, who runs Keighley digital marketing agency Puddle Digital. He added: “I love the outdoors and spend a lot of time touring on my motorbike.

“I constantly see the invaluable job the Yorkshire Air Ambulance delivers, the difference they make to saving lives, so we were delighted to team up with Rob to raise money for such a worthy cause.”

The YAA is an independent charity providing a rapid response emergency service to five million people across Yorkshire, attending over 1,000 missions a year – an average of three a day.

The charity needs to raise £12,000 each day to keep its two helicopters flying, equivalent to £4.4m a year.

Rob, Steve and their fellow climbers are hoping to complete their marathon mountain challenge by scaling Snowden in Wales, Esk Pike and England’s highest Scafell Pike in the Lake District and Ireland’s Carrauntoohill before the end of October.

To sponsor them go to www.justgiving.com/teams/12×12