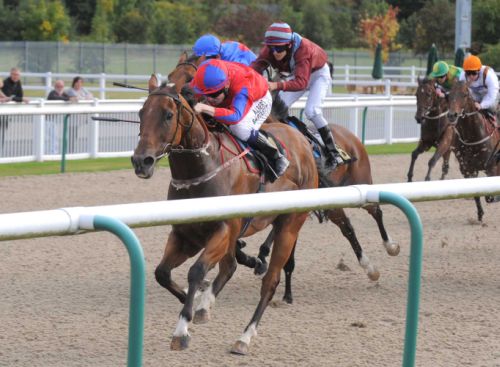 The Middleham Stables Open Day celebrates its 21st anniversary this year on Good Friday, April 18, with a host of attractions for horse-racing enthusiasts and families alike.

Fifteen stables will be open to the public, with more than 500 horses for visitors to see, while racing will be screened live from a big screen at the Top Cross in Middleham from 1.45pm.

The star attraction will be “Trooper” Middleham, the popular cavalry horse, who was named after the town. “Trooper” Middleham will help to open proceedings at 9.15am and will then tour the town, before resting at the Manor House Stables of Jason Ward.

Another highlight of the day will be to see legendary Almaty Express, who will be paraded at John Weymes Racing at Ashgill Stables at 11am and 12.45pm.

Robert Beaumont, one of the organisers of the day, said: “Almaty Express is one of the most genuine racehorses the north of England has ever seen. He was bought for less than £4,000 after a selling race at Catterick 10 years ago, and during 143 starts, he won 22 and finished in the first three in a third of them. He is now enjoying a well-deserved retirement”.

Last year’s event raised more than £12,000 despite the bad weather and organisers hope to raise even more for this year’s many charities, including the Yorkshire Air Ambulance and the Household Cavalry Foundation.

Mr Beaumont said: “Last year was hit by terrible weather, with Easter being much earlier than usual. We are hoping for a much milder and warmer day this year to help make the Open day a great success. With the Tour de France passing through Middleham in July, and the continuing interest in Richard III, who had very special links with the town, these are tremendous times for the Newmarket of the North.”

He added: “With 16 stables open, containing some of the best racehorses in the north of England, this year will be one of the biggest and the best in the Open Day’s history. As we are celebrating our 21st anniversary, there is every cause for celebration.”

James Bethell, the chairman of the Middleham Trainers Association, said: “The traditional date for the Stables Open Day had been threatened with the introduction of Good Friday racing this year. However, with the support of Betfair and the Arena Racing Company, who are arranging the live screening of racing from Lingfield and Musselburgh, we are preparing for one of the most enjoyable Open Days of recent years”.

Jim Allen, the director of Arena Racing, added: “We understand that the changes to the racing calendar were controversial to some in racing but we are very pleased to show our support to the Middleham Open Day by ensuring visitors have the opportunity to enjoy the day’s racing as well as making the most of the many attractions on offer”.

Meanwhile a spokesman for Betfair said: “Open Days are an exciting way of allowing existing racing fans, and potential new fans, to see the sport from a unique angle. We are pleased to be part of making this happen”.

William Hague, Conservative MP for Richmond and the Foreign Secretary, said: “Middleham is a tremendous success story and fully deserves its reputation as the finest racing centre in the north of England. We have some phenomenally successful trainers and it is wonderful that they open their yards to so many people. This is a very special day in the racing year”.

Tickets cost £10 per adult, including a souvenir brochure and a chance to win a prize in the programme draw, which includes a signed photograph of top jockey and the 2010 BBC Sports Personality of the Year A P McCoy.

Admission for accompanied children under 12 is free.

The yards are open to the public on Good Friday from 9.30am – 1.00pm or 2.00pm. Free parking is available in Middleham or nearby Leyburn, with free bus links between car parks and the outlying stables. This includes Ann and George Duffield are opening their successful Sun Hill Stables at Constable Burton from 9.30am until 4.30pm.