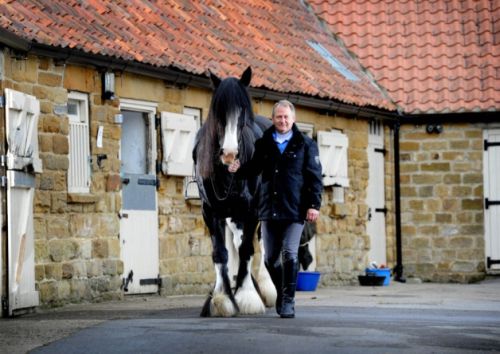 How do you thank the emergency services for saving your life? Michael Wood has found a way and he has now written a book about his experience. Catherine Scott meets him.

Chatting to Michael Wood in his beautiful Grade 2 listed home in North Yorkshire it is hard to imagine that just a year ago he was fighting for life after an horrific horse riding accident.

It was on June 16 last year just three months after Michael, his wife Ena, their seven horses, mainly Clydesdales, and numerous dogs moved into their home in Boltby, that everything changed.

“It was a beautiful day and I was out on a three-hour hack with my friend Andy from my home to Gormire Lake, just below Sutton Bank,” recalls Michael. “As I had saddled up Diola, a Dutch Warmblood, we had no premonition of catastrophe.”

But as the two friends decided to have a little fun and let their horses gallop something went wrong.

“I’ll probably never know exactly what happened, but I vaguely recall feeling Diola start to buck and hearing my own voice squeal. The next thing knew I was flat on my back on the ground and Andy was standing over me.

“It really didn’t seem that serious. It was just a fall. I’d had plenty before. I thought once I’d got over being winded I’d climb back on the saddle and ride on.”

But Michael’s injuries were far more serious than anyone could have imagined.

Some passing walkers came over to help and tried to get a mobile phone signal to call for help, which they eventually managed to do.

“I remember the ambulance crew arriving and asking me if it was okay if they cut my coat off,” continues Michael.

“I still thought everyone was making a fuss about nothing. From the moment it happened to this day I have suffered very little pain really.”

It soon started to dawn on him that things were far more serious than he thought. The paramedic noticed spots of blood on Michael’s chest, a sign of internal bleeding. They immediately called for the air ambulance as speed had become even more crucial.

“I never panicked though. As I lay there I did wonder if the farmer might come and put me out of my misery. I remember thinking: ‘If I die today I have had the most fantastic life so I can’t grumble. I haven’t wasted a moment, so I regret nothing’.”

As he was stretchered on to the air ambulance Michael was starting to lose consciousness.

The air ambulance took Michael to the James Cook Hospital in Middlesbrough and he was rushed straight to intensive care where he was to spend more than a week fighting for life.

“I still don’t think I realised just how serious things were. It wasn't until a nurse pulled the curtains round me and explained the extent of my injuries and said ‘We nearly lost you’ that it hit home. It was worse for my wife Ena, who was faced with the prospect of having to sell the business and the house if something had happened to me.”

Doctors think Diola must have fallen backward onto Michael after she had thrown him off, landing on his left hip, She then rolled over him in an attempt to get back on her feet. As a result she caused catastrophic injuries, pushing his stomach up into his diaphragm which shattered, opening his pelvis, smashing both hips and many of his ribs.

Doctors had to remove his spleen in order to repair the other damage and he underwent two operations, one lasting seven hours, while surgeons tried to mend his shattered body.

Seeing him today it is hard to imagine just how seriously injured he was. He says much of that is down to his physiotherapist, Louise Broom.

However he does admit to some lasting effects. Due to having no spleen he will have to take penicillin for the rest of his life and he does suffer from pains and stiffness in his right hip, but things could have been far worse.

“If it hadn't been for the Yorkshire Air Ambulance and staff at James Cook I would not have survived,” he says matter-of-factly. “I will be forever in their debt. How do you say ‘thank you’ to people who have saved your life?”

He may not now how to thank them but he is doing his best to do so. He has just published a book about his life and accident in a bid not to only raise funds for the air ambulance but also to give people some insight into how he became a successful entrepreneur despite struggling at school.

All proceeds from Whatever It Takes go to the Yorkshire Air Ambulance. Michael also recently held a party at his home which raised in the region of £20,000 and he also invited some of the staff who helped him. He is writing a second book which will raise funds for the James Cook Hospital. He is also involved in a campaign to raise £600,000 for a new scanner. But he wants to do more.

“I had never really thought about the resources the NHS needs,” says Michael. “I was horrified by the way some people abused the system and were rude to the nurses. I was eternally grateful to everyone. We take the NHS for granted. One of things I want to do is raise awareness of just how much it costs to be treated by the NHS.”

As for horses, they are â€¨still one of the loves of Michael’s life.

Within six months of leaving hospital he was out riding again and now tries â€¨to get out at least three times a week.