Meet the Chief Pilot of the Yorkshire Air Ambulance 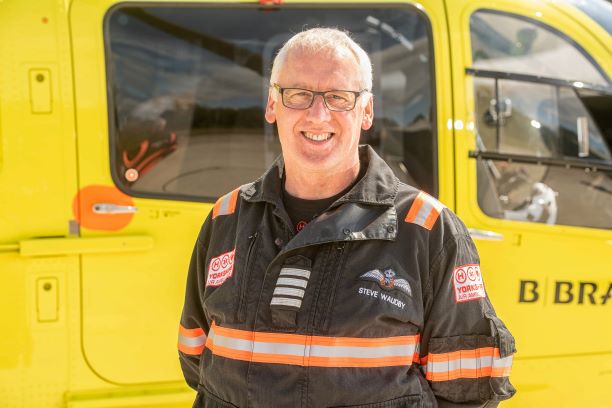 The Yorkshire Air Ambulance provides a life-saving rapid response emergency service 365 days a year to five million people across 4 million acres of Yorkshire, and making sure everything is running smoothly in the cockpit is Chief Pilot Captain Steve Waudby.

In 2018, the Yorkshire Air Ambulance attended 1,858 incidents across Yorkshire and flew 416 patients to major trauma centres across the county.

Steve Waudby has worked periodically for the Yorkshire Air Ambulance over the last eight years in a freelance capacity, and in August last year he took up the permanent position of Chief Pilot.

In his role as the Chief Pilot of the Yorkshire Air Ambulance, he is responsible for the safety of the aircraft and crew, staff development and training along with aircraft maintenance.  Not one to shy away from being behind the controls, Steve is also regularly rostered to fly both Helimed98 and Helimed 99 with the duty crew.

Steve’s passion for flying started at a mere age of 13, when he joined the Air Training Corps (air cadets).  He went solo in a glider at age 15, became a gliding instructor at age 16, and at age 20 won a Royal Air Force flying scholarship, where he obtained his Private Pilot’s license.

He joined the RAF in 1983 and worked his way up to Squadron Leader, qualifying as a flying instructor and later becoming the senior helicopter instructional standards examiner.  Throughout his 22 years of service, he has has flown all over the world including Northern Ireland, Bosnia, Bangladesh and Hong Kong.

Speaking of what inspired him to be a Pilot, he said: “My dad influenced me greatly. He was an engineer in the RAF who also started with the air cadets.  The air cadets encouraged me and helped me to develop my flying skills.  Without their grants and scholarships I wouldn’t be able to do what I do today.”

Steve also has experience dealing with medical emergencies from a young age.  When he was 12, he was given a Royal Award for Gallantry for saving a four-year-old who had fallen into a flooded quarry.  “I was playing near the quarry when a lady shouted that a child was drowning.  I ran down into the quarry and saw a young child face down in the water about 12ft from the edge.  I jumped in and dragged him to the side but was unable to lift him out due to the steep clay banks which were very slippy.  I had to tread water with him until help arrived.  The lady who shouted to me and a teenage boy eventually dragged us both out of the water and the victim was quickly revived.  The 4-year old boy made a full recovery.  I was awarded the Liverpool Shipwreck and Humane Society Life Saving Award and the Scouting Gilt Cross for gallantry, I was also invited to meet Her Majesty the Queen and Prince Phillip at Windsor Castle.”

During his tour in Hong Kong Steve carried out several air sea rescues in Typhoon and severe tropical storm conditions and was awarded the Edward and Maisie Lewis award for the best search and rescue mission of 1993.  He and his crew rescued the crew of a ditched helicopter and 13 Chinese fishermen from a fishing boat in distress in winds gusting to over 100 mph and waves of over 40ft high.

With Yorkshire’s vast rolling Landscapes, abundance of farm life and some of the biggest cities in the North, YAA Pilots often have their work cut out.  Steve said: “We are trained to handle almost any situation, but the most challenging aspects of our job are flying in bad weather, landing in built up areas and flying in mountainous terrain where the winds are unpredictable.  Now that we can fly at night, utilising night vision technology, we have to do all of the above in the dark.”

From call inception to being up the air, Steve said: “We aim to be in the air within 3 minutes of receiving the call, and 10 minutes in the evening due setting up our night vision technology.  The Yorkshire Air Ambulance helicopters are able to travel at speeds of up to 160mph to transfer patients to hospital.”  Working with traumatic situations can be challenging, not only for the paramedics on scene, but also the Pilots who are in charge of ensuring the patient is safely transferred to hospital. “The incidents we are most apprehensive about are the ones involving children.  Until you get there you have no idea what the situation is going to be and it’s something that we all have to mentally prepare for.”

Speaking of why he loves working for the Yorkshire Air Ambulance, Steve concluded: “What I love about working for the YAA is the teamwork more than anything.  We have a wonderful bunch of paramedics and doctors who are second to none.  I like working in a team and the friendly banter that comes with it.  We see a lot of dreadful accidents and incidents each week, so it’s important to keep spirits lifted as much as possible and the team are fantastic at supporting each other.”

The Yorkshire Air Ambulance is an independent charity needing to raise £12,000 per day to keep both of Yorkshire’s air ambulances in the air and maintained.  This is equivalent to £4.4 million each year.