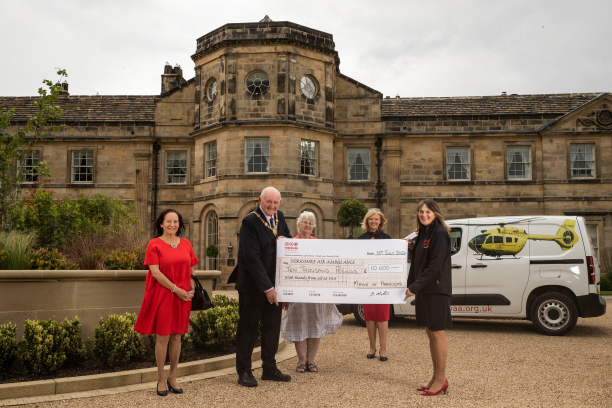 The Mayor of the Borough of Harrogate, Councillor Stuart Martin MBE has presented the Yorkshire Air Ambulance with £10,000 after nominating the life-saving charity as the Mayor’s ‘Charity of the Year’ for the mayoral year 2019-2020

The money was raised through a variety of events and fundraising activities, including a Black Tie dinner at Grantley Hall, a Service of Remembrance at Ripon Cathedral and a Carol Concert at the Royal Hall in Harrogate.

The cheque presentation took place at Grantley Hall who hosted the Black Tie Dinner and in attendance were Mayor Stuart Martin and his wife April Martin, Valeria Sykes owner of Grantley Hall, Helen Callear Director of Fundraising (North and East) and Linda Stead, North Regional Fundraiser both from the Yorkshire Air Ambulance.

The Mayor of the Borough of Harrogate, Councillor Stuart Martin MBE, said: “I’m delighted to have been able to support the Yorkshire Air Ambulance and will continue to do so in these uncertain times. I would like to pass my thanks and gratitude to everyone who has supported my fundraising efforts over this past year.”

Linda Stead, North Yorkshire Regional Fundraiser for the Yorkshire Air Ambulance, said: “We would like to thank the Mayor and Mayoress, Stuart and April, for their continued support and generosity over the last year and to everyone who has attended and supported their events.

It costs £12,000 a day to keep both of Yorkshire’s air ambulances maintained and in the air and the money raised will help greatly towards our daily funding and will enable us to continue saving lives across the region, especially in rural areas such as Harrogate and North Yorkshire where journey times to hospital are longer, and our service is so very vital to the smaller communities which we serve.”