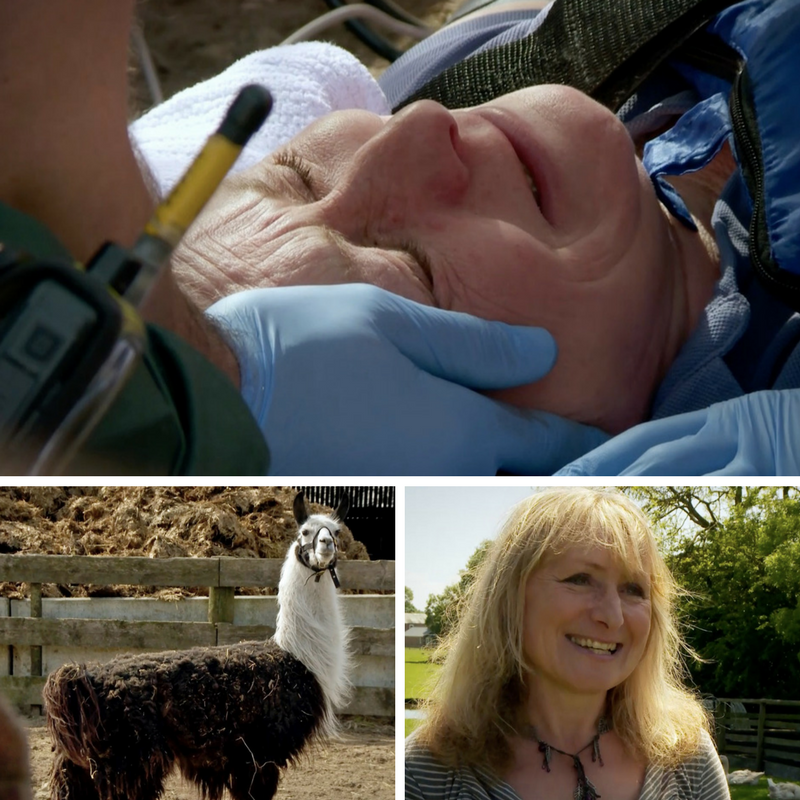 Lyn Arrowsmith was delivering her llama Pedro to an intermediary at Sutton-under-Whitestonecliffe, near Thirsk, prior to him being sold. It is believed the animal knocked Lyn off the trailer ramp while he was being offloaded.

She hit her head on the concrete floor and was unconscious for over five minutes. When Yorkshire Air Ambulance paramedics arrived, Lyn was very agitated and distressed making treatment and getting her to a major trauma centre a real challenge.

The drama features in this week’s episode of the award-winning TV series Helicopter ER, which follows the life-saving work of the Yorkshire Air Ambulance.

Lyn was airlifted in minutes to the James Cook University Hospital, Middlesbrough, where she was treated for a major skull fracture and three bleeds on the brain.

“I don’t remember anything about the accident though I wouldn’t blame Pedro. I can only think something must have spooked him and he’s bolted,” said Lyn who runs a rare breeds farm at her home in Raskelf, near Easingwold.

“My Mum was called and she told me later I was screaming and shouting a bit, but the first thing I remember is waking up as I was going into the CT scanner.”

The Mum-of-two, who spent a week in hospital following the accident in April, has made a good recovery but has been left with no sense of smell and a damaged sense of taste.

“I have really lost my enjoyment of food because everything has an after taste of either perfume or burnt plastic,” added Lyn.

“I produce my own meat and knowing the local provenance of our food is really important to me. It also tastes so amazing so not being able to enjoy that does get you down a bit.

“But I have been very lucky and I am very grateful to the Yorkshire Air Ambulance. I know living where we do, and doing what I do, just how vital the service is but you just never expect that you will need it.

“We were at an agricultural show after the accident, and my son had been given £5 to spend, which normally would have all gone on sweets, but he said he had given it to the Yorkshire Air Ambulance stall because they had saved my life which brought it all home.”

Lyn’s accident, which happened in April, can be seen in this week’s episode of Helicopter ER which also features a cyclist whose life was saved by the actions of a Community First Responder, and a walk near the stunning Aysgarth Falls which ended in a flight to hospital.

Yorkshire Air Ambulance (YAA) serves five million people across Yorkshire and carries out over 1,250 missions every year. The charity needs to raise £12,000 every day to keep saving lives.