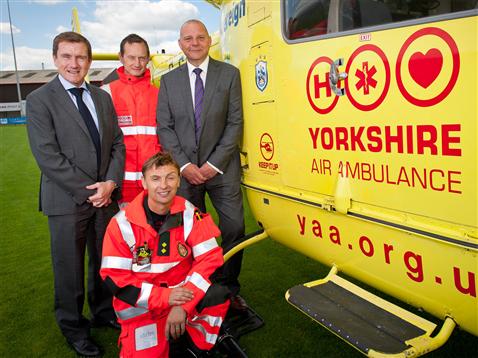 Huddersfield Town’s and the Yorkshire Air Ambulance’s ground-breaking Keep it Up partnership will run for another three years.

The pioneering ‘Keep It Up’ campaign, was launched back in 2009 to help establish sustainable income for the Charity as well as supporting Huddersfield Town’s Youth Academy, which actively promotes the development of future football stars from the local community. Over the last five years, Huddersfield Town have driven the campaign through a series of high profile events including Walk for Pounds, Run for Pounds and the now famous Pedal for Pounds cycle challenge.

In late June this year, Town and YAA announced that the campaign has passed the £1m mark, with a YAA helicopter landing at PPG Canalside to celebrate the milestone.

The monies have been raised through a series of successful events, including the annual ‘Pedal for Pounds’ bike rides which took hundreds of riders, hundreds of miles across the UK. The most recent ride saw nearly 300 cyclists embark on the ‘Chapman Trail’ cycling the 250 miles back to Huddersfield’s John Smith Stadium from Arsenal’s Emirates Stadium in London.

Numerous other events have also been arranged by the Club and YAA or by fundraisers, which have added to the total. The YAA logo also appeared on the front of the team’s shirts during the 2009/10 season, with the players wearing a unique YAA red and yellow shirt during the home win vs Southend in 2010.

“We are absolutely delighted that HTAFC is looking to continue our partnership for at least another three years.

“When we launched the ‘Keep It Up’ campaign five years ago none of us quite knew just how successful it was going to be – so to be extending that to at least eight years is phenomenal. HTAFC staff and fans have very much become part of the YAA family over the years and we are looking forward to seeing what the next three years bring.

“We’d also like to thank HTAFC and their fans for their continued support of our Charity, as well as helping us raise the vital funds and awareness that we need to continue our daily operations.”

“I am delighted that on the back of the £1m landmark we have agreed to extend the Keep it Up campaign for a minimum of three years.

“Our partnership with the Yorkshire Air Ambulance is the thing that I am asked most about by our fans; they are as proud as we are by what has been achieved.

“Hopefully we can take the campaign on to greater heights over the next three years and continue to be a huge financial benefit to our Academy as well as saving lives through the Yorkshire Air Ambulance.”