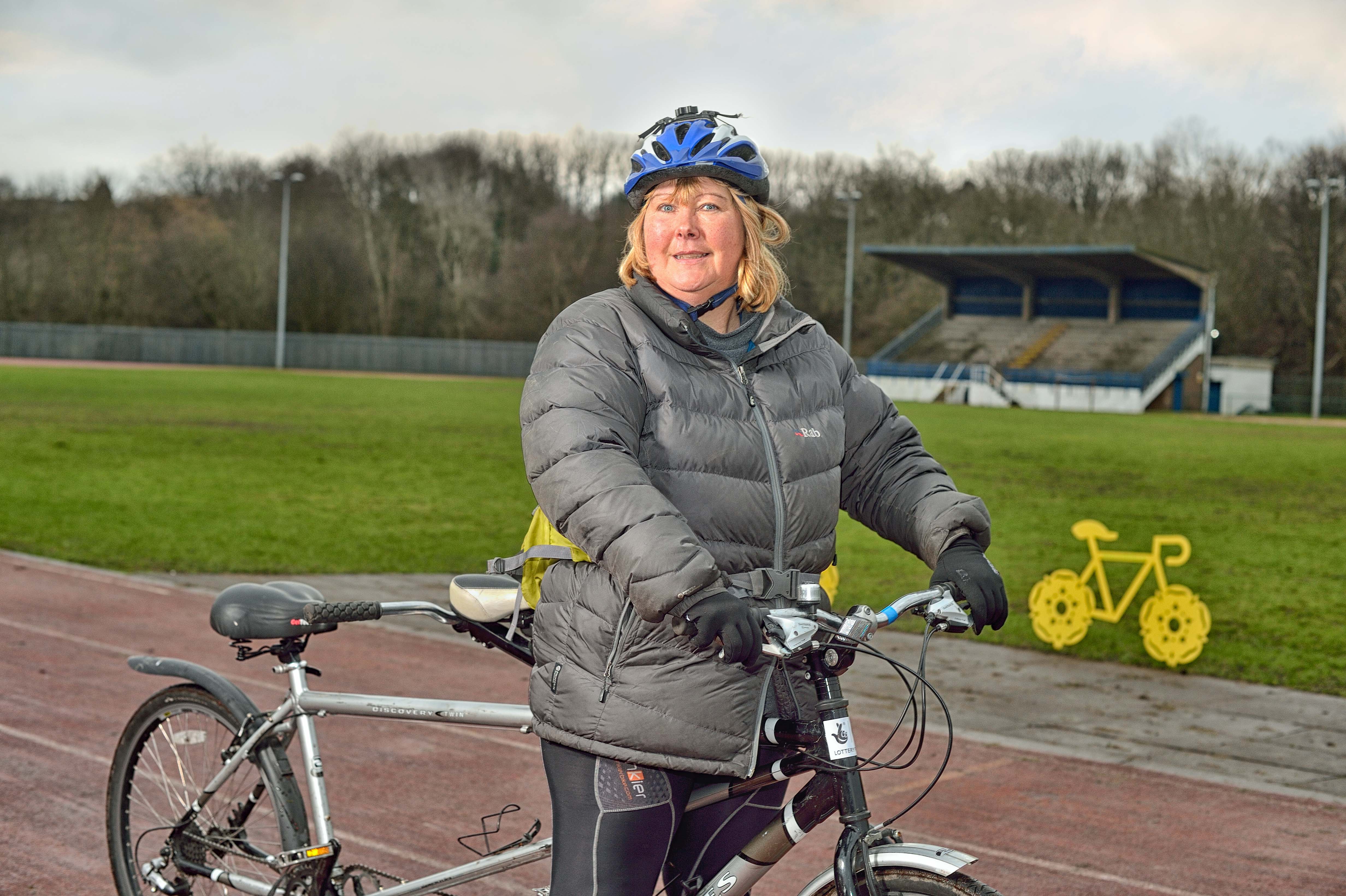 Karen Brooke was a keen cyclist before the devastating accident two years ago when she slipped on ice outside her Elland home, near Huddersfield.

The former Youth Team leader was leading her horse who, startled at her fall, kicked out hitting Karen on the side of her head causing life-changing injuries.

But the life-long Huddersfield Town supporter has signed up to take part in the eighth annual Pedal for Pounds charity ride – a 260-mile ride between May 2 and 6 from Dortmund, Germany, to Huddersfield called the ‘Wagner Way’, which is being sponsored by Made by Cooper.

Karen, who can currently only walk short distances with a stick, is hoping she will be able to complete between 10 and 20 miles of the route each day on a tandem provided by the Streetbikes community cycling project, who are also providing co-riders for Karen throughout the journey.

She is now training hard for what will be a huge challenge – going on her home static bike every day, training with StreetBikes every week at Spenborough Running Track, as well as regular physiotherapy and swimming sessions.

“Before the accident I did a couple of the previous Pedal for Pound events and my brother did it last year,” said Karen. “I wanted to take part to raise money for the Yorkshire Air Ambulance through the ‘Keep It Up’ campaign, and to give myself a challenge. It is very hard but I will do it.”

The Pedal for Pounds ‘Wagner Way’, sponsored by Made By Cooper, is part of the ‘Keep It Up’ campaign between Huddersfield Town Football Club and Yorkshire Air Ambulance.  Since its launch in 2009, the partnership has raised more than £1.4m for both HTAFC’s Academy at the rapid-response emergency services Charity, with 50% of the monies raised being equally split between the two organisations.

Following her accident, Karen was airlifted in minutes by Yorkshire Air Ambulance to specialists at Leeds General Infirmary. The 51-year-old suffered two skull fractures and severe bruising and bleeding on the brain.

“I was lucky to survive,” said Karen. “I had only a slight pulse when Yorkshire Air Ambulance landed and I don’t think I would have made it without them. They saved my life.”

Karen was in a coma for two months and initially suffered personality changes as well as paralysis down her right side. She was transferred to Dewsbury Hospital where she spent a further four months in rehabilitation learning how to walk, talk, read and write again.

Karen was discharged to her specially adapted home next door to parents Kath and David. “When I came home I had carers four times a day, getting me up, cooking and putting me to bed.

“But I am very determined and, with lots of support from my family I have made myself get better so I can do things myself.”

Although the main ‘Wagner Way’ bike ride has now sold out, supporters and avid cycling fans are being invited to join the last leg of the bike ride from Hull back to Huddersfield.  The 80 mile ‘Hull to Home ride will see entrants meeting up with the P4P8 riders making their way back to Huddersfield on Saturday 6th  May.  Anyone interested in participating can find out more information and access the application form through HTAFC’s website www.htafc.com

Yorkshire Air Ambulance serves 5million people across Yorkshire and carries out over 1,250 missions every year. It needs to raise £12,000 every day and has just replaced its two, ageing aircraft with brand new, state-of-the-art Airbus H145 helicopters.

Katie Collinson, Partnerships Manager from Yorkshire Air Ambulance said: “We are really looking forward to having Karen back on the Pedal for Pounds bike ride this year.  Karen has been through so much over the last few years and she’s a real inspiration to us all with her grit and determination to not only learn to walk and talk again, but now to join in this epic bike ride!”