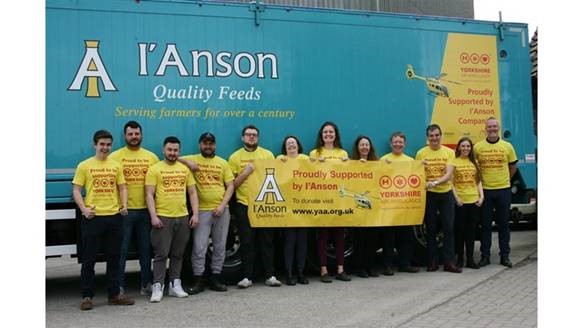 The Masham based  I’Ansons have set their sights on new fundraising challenge for Yorkshire Air Ambulance, by taking part in this year’s Total Warrior.

I’Anson Brothers Ltd is one of the UK’s leading manufacturers of animal feed based in Yorkshire. They are a family run business and have been serving farmers nationwide since 1900.

The company has also raised money through renting out their distribution yard to television production crews and the Tour de Yorkshire and by taking part in various funding raising activities, such as the Great North Run.

Now 21 I’Anson employees have pledged to take part in the 6K Total Warrior obstacle course at Bramham Park on the 22nd June in Leeds and they have already raised over £400.

Local coach company, Atkinsons of Ripon, have also given their support to the I’Ansons by offering to drive them to and from Bramham Park to help limit travel expenses and ensure as much money as possible goes to the charity.

Ged Hall & Hannah Bowe, I’Anson employees and organisers of the I’Ansons Total Warrior challenge, said: “The Yorkshire Air Ambulance is highly important in the rural areas of North Yorkshire, in particular Masham which is steeped in agriculture and that not easy to access. We’re hoping to raise as much money as we can through this year’s Total Warrior. “

Helen Callear, Yorkshire Air Ambulance Director of Fundraising North and East, said: “We are proud to work with I’Ansons and cannot thank them enough for their continued support and generosity over the last few years.

The money they have raised has helped tremendously towards the vital funding of the Yorkshire Air Ambulance and helped us to continue saving more lives across Yorkshire.”

The Yorkshire Air Ambulance provides a life-saving rapid response emergency service 365 days a year to 5 million people across 4 million acres of Yorkshire. They need to raise £12,000 a day to keep both of Yorkshire’s air ambulances in the air and maintained.