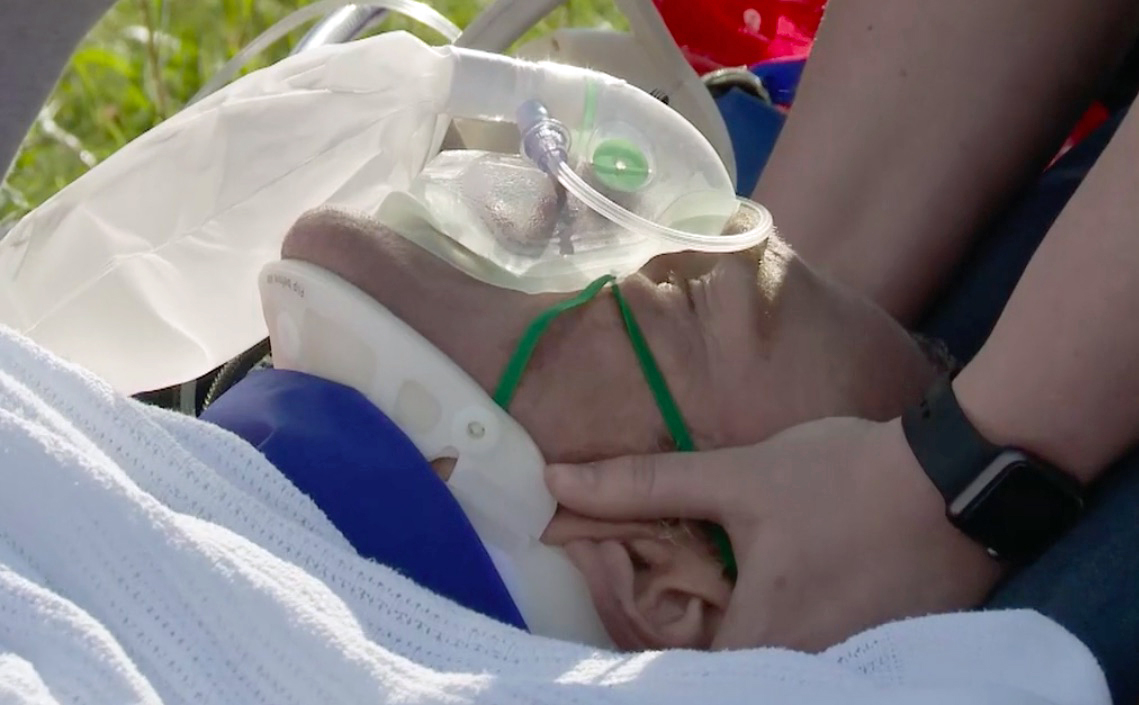 Ian Dawson had just come off Junction 5 of the M18 on his way home from his job as a postman in Brigg when very low blood sugar levels caused a ‘hypo’ attack.

The Type 1 diabetic was catapulted 30 metres through the air, smashed his legs into a road sign before landing on the other side of the motorway junction roundabout barrier.

“My sugar levels must have plummeted on the ride home but I was concentrating so much I didn’t realise it was affecting me until I heard a loud bang, which was me hitting the sign, and I remember lying on the ground and pretty much accepting death,” said 51-year-old Ian.

“My legs were just in a knot but there was an angel on my shoulder that day who literally saved my life.”

That ‘angel’ was off-duty District Nurse Sister Kathryn Bebb who pulled over to help. “I just grabbed my nursing bag from the boot of the car and followed this girl over the barrier to where Ian was on the ground,” said 30-year-old Kathryn from Cusworth.

“When I got there his legs were really badly smashed. I got a couple of lads to call the ambulance and these other two girls helped me as I cut his trousers off.

“He was bleeding quite heavily out of one of his legs where his artery had been severed so I tourniqueted his leg and we applied compression and just kept talking to Ian. He said he was a diabetic and needed some sugar so someone got a can of coke from their car which helped.”

Kathryn, who works for Rotherham Doncaster and South Humber NHS Foundation Trust (RDaSH), added: “His injuries were very gruesome with a lot of bones protruding but these girls, and everyone who stopped to help, were amazing and it just goes to show what people can do.”

Ian was airlifted to the Northern General Hospital, Sheffield, by Yorkshire Air Ambulance but doctors were unfortunately unable to save his shattered left leg which was amputated below the knee.

The accident happened in April last year, and Ian has gone through months of painful hospital treatment and physiotherapy with more to come.

“Everyone from the Air Ambulance to the hospital staff have just been fantastic and I can’t thank them enough but this has just completely changed my life and it has been very hard at times,” added the father-of-two Ian.

“My false leg is OK but I still have a lot of pain with my right leg because of the tissue scarring and it’s very difficult to walk, but while I don’t think I will be able to walk without crutches, I’m hoping things will improve a lot.”

He and partner of 20 years Karen got married in June and the couple are looking forward to a new life when they move into a bungalow in Wheatley, Doncaster.

The programme, which airs at 9pm on UKTV’s real life channel Really, also features the dramatic attempts to save the life of a grocer who collapsed and stopped breathing while loading his van and a boy’s daring jump into the water at Whitby harbour which ends in a serious injury

Photo caption:  Ian Dawson being treated at the scene of the crash and Doncaster district nursing sister Kathryn Bebb who stopped to give life-saving help.