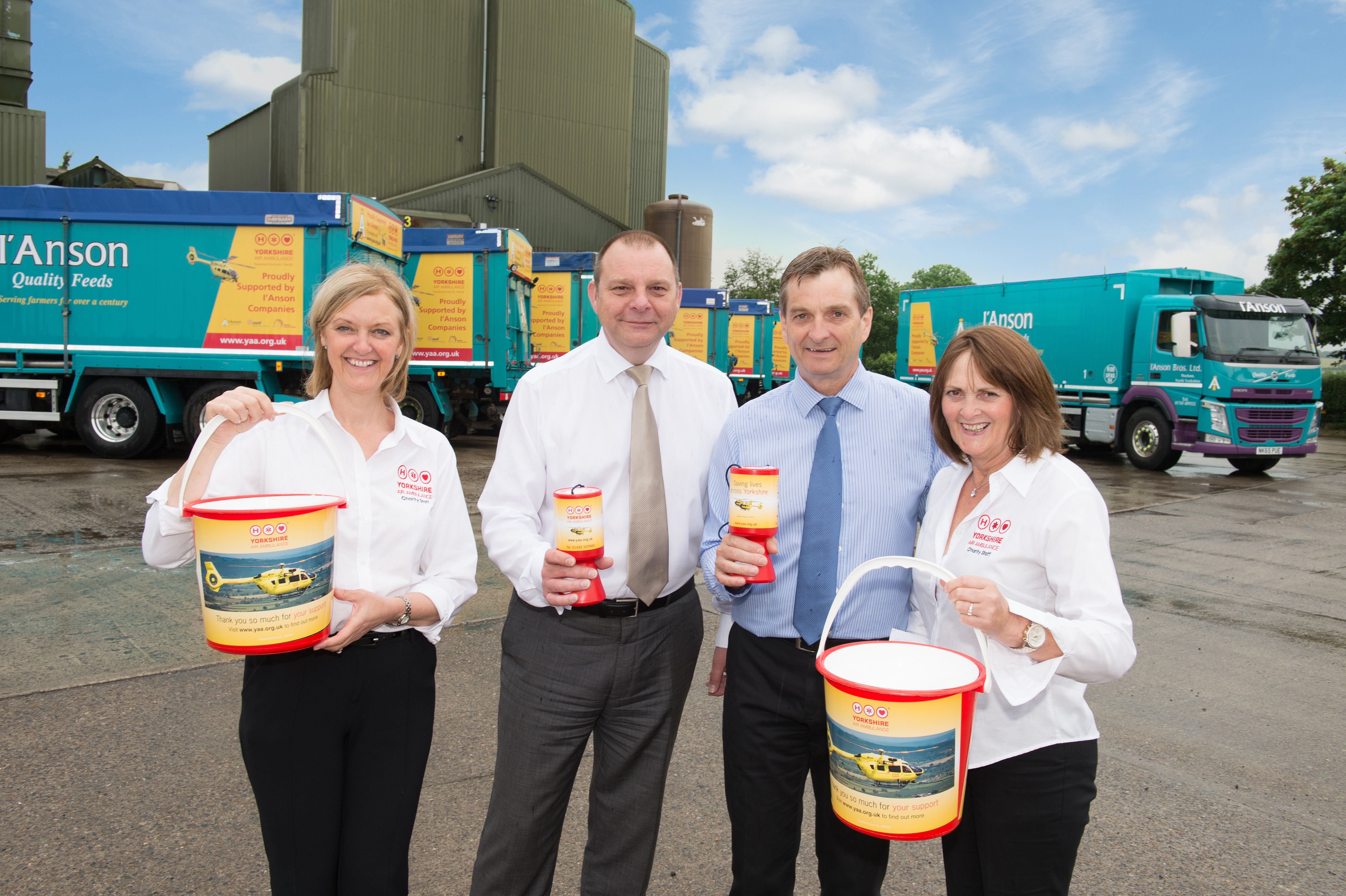 Masham-based I’Anson has pledged to donate £60,000 over three years to the air ambulance charity, to support its vital, lifesaving work throughout the county. The company will fund the donation out of the savings it is set to make from replacing its old style conventional lighting with state of the art LEDs.

The changes are set to be implemented in the firm’s mill, the hub of the 7.5 acre site where feed for beef and dairy cattle, sheep, lambs, horses as well as for a range of other farm animals are manufactured, along with ingredients for pet foods. The new £35,000 lighting system will see 320 modern LED bulbs replace over 800 conventional fluorescent fittings in a move which will reduce CO2 emissions while also saving both energy and money.

Calculations performed by the installer have shown that the older lighting system used 260,000 Kilowatt hours (kWh) per annum, while the new system will only use 80,000 kWh a year – a saving of 70 per cent. The 180,000 kWh saving is equivalent to around £20,000 in energy costs. The reduction in energy usage will reduce the company’s carbon footprint by 98.5 tonnes.

The new lighting system will also lead to greatly reduced physical waste, as the average LED light has a lifespan of 50,000 hours, compared to the 8,000 hours offered by fluorescent bulbs.

Along with supporting general running costs, some of the donation will go towards the provision of night vision goggles for air ambulance pilots, allowing the helicopter to safely operate in hours of darkness.

Chris I’Anson, Managing Director of I’Anson, said: “We’re a Yorkshire company through and through and we believe in putting something back into the local community. In a large county like this, where much of the countryside operates as an open air factory, a fully functional air ambulance is a real necessity.  Some of the more remote areas are very difficult to access by road and in an emergency the air ambulance can literally mean the difference between life and death for a casualty.

“To be able to make this donation as a direct result of taking action to reduce our carbon footprint and our energy consumption is particularly pleasing. The drivers in our transport fleet criss-cross the region every day and often see the distinctive air ambulance in the skies so , as a company, we have a real pride in knowing that we are making a contribution to keeping the service operating. I’ve known Paul Gowland and Helen Callear from Yorkshire Air Ambulance for a while now and my thanks go to them for helping make this donation possible.”

In 2016, Yorkshire’s two air ambulances flew 1,390 missions, equating to almost four a day, and treated 855 patients. The helicopters are based at airbases which allow them to access any part of Yorkshire within 20 minutes flying time.

Agriculture continues to be one of the most dangerous industries in the UK, with 27 people suffering fatal injuries during the course of their work in 2016.

“This is a very generous and much appreciated gesture by I’Anson that will help us to continue providing our much needed service. It’s particularly appropriate that one of Yorkshire’s best known and longest established rural businesses should be helping an operation that does much of its work in some of the county’s most remote corners. We are very proud that our principal supporters are local, family-owned companies and I’Anson is a perfect match and we welcome them to the Yorkshire Air Ambulance family.”

Now one of the UK’s most successful specialist suppliers of farm feeds, micronized ingredients and horse feeds, with customers in over 30 countries worldwide, I’Anson is an independent, fourth generation, family-owned and managed company. For more information visit www.ianson.co.uk.