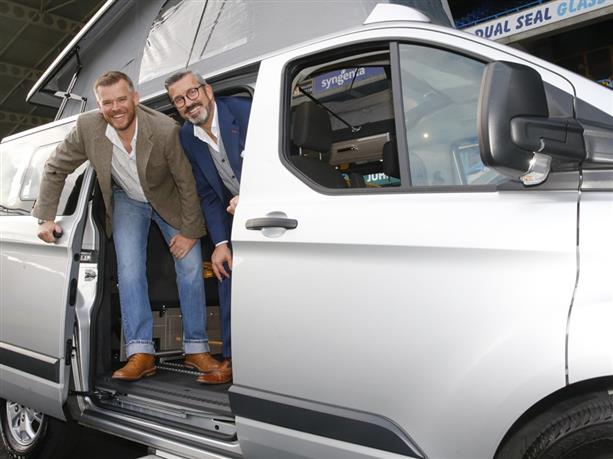 Sean will be joined by his friend, local businessman Richard Chambers, to take on an extraordinary driving challenge that will start in Huddersfield on 11 November and end at Town’s Sky Bet Championship game at Cardiff City eight days later.

Driving a Ford Tourneo Terrier, kindly donated by Wellhouse Leisure, Sean and Richard will travel an incredible 2,770 miles in just over a week to raise money for the Town Foundation, the Yorkshire Air Ambulance, the Hollybank Trust, Goals 4 Hearts and Prostate Cancer UK.

Supporters can donate to these worthwhile causes by visiting http://uk.virginmoneygiving.com/SeanJarvis.

Here’s the plan for Sean and Richard, who are pictured above in their vehicle of choice:

Day One (Saturday)
Huddersfield to Dover – ferry to Dunkirk – drive to Dortmund via Antwerp, Belgium, and PSV Eindhoven in the Netherlands

Day Two (Sunday)
Dortmund to Vaduz in Lichtenstein, via Austria and Switzerland, then on to Milan in Italy

Day Three (Monday)
Milan to Monaco, then on to Marseille (France)

Day Four (Tuesday)
Marseille to Andorra, via Spain, then onto Montpellier

“The Club has five absolutely fantastic charitable causes that it is supporting during the 2016/17 season and I wanted to do something big that would benefit each and every one, complimenting other superb fundraising initiatives such as Sunday’s ‘Walk for Pounds’.

“Richard and I will cover all the costs associated with our eight day trip, meaning that every penny we raise will go to the quintet of causes.

“We’ll also pick up items on our way – Belgian Beer, Swiss Chocolates, some Beaujolais Nouveau and the rest – to auction off for the causes on our return.

“I know Town fans well and I’m sure they will all donate generously to these causes. I’m sure the challenge will be difficult and a real slog at times, so please support it!”