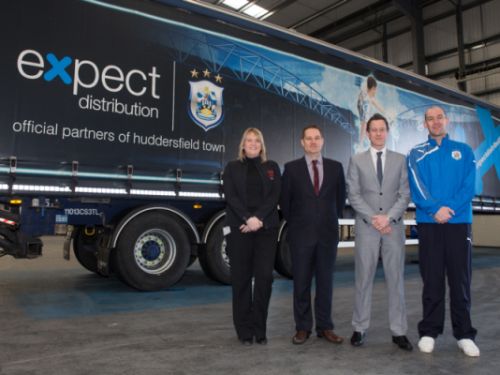 Huddersfield Town Club Partner Expect Distribution has pledged its support to this year’s Pedal for Pounds bike ride by offering its 45 foot liveried trailer to transport the cyclist’s bikes down to the starting point in London.

P4P5 cyclists will drop their bikes at PPG Canalside the night before the event on Tuesday 22 April where they will be loaded on to the Expect trailer ready for it to travel down to the capital ready for day 1 of the fundraising bike ride on Wednesday 23 April.

“It’s great to see so many cyclists taking part to raise money for such a fantastic cause and the event grows in profile year on year.

“It’s a fantastic team effort from those who organise the event; through to the dedicated cyclists who take part and we are more than happy to lend our assistance where we can.

“We wish everybody the best of luck with the ride and their fundraising!”

Supporter Partnerships Manager Robyn Deegan added, “Without a doubt the most difficult element of planning the p4p bike rides is the logistical side.

“Getting 300 people down to London is easy enough, but getting their bikes there is a much harder task!

“On behalf of all the Club and the Yorkshire Air Ambulance I would like to express our thanks to Neil and the rest of the team at Expect Distribution for their support in helping us do this- put simply we couldn’t have done it without them.”

This season marks the fifth annual Pink Link Pedal for Pounds bike ride in aid of the ‘Keep It Up’ campaign which raises funds for the YAA charity and the HTAFC Academy.

The ride will begin at Arsenal’s Emirates Stadium, with participants cycling 250 miles back to the John Smith’s Stadium in time for HTAFC’s last home game v Leicester on Saturday 26 April.