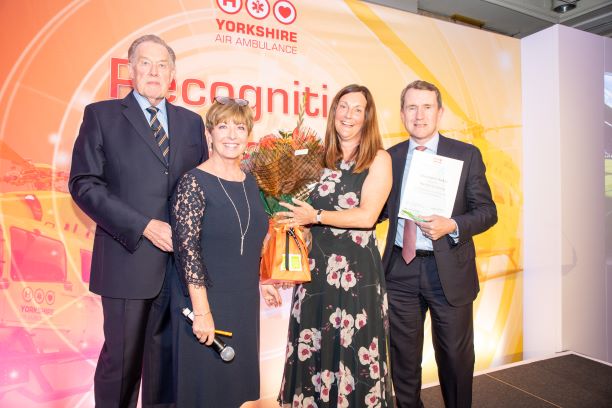 The Yorkshire Air Ambulance held their annual Recognition Awards at Oulton Hall in Leeds on the 17th October, celebrating the Yorkshire Businesses and Fundraisers from across the region who have dedicated their time to raise money for the charity.

Founder of the Card Factory and former Huddersfield Town Chairman Dean Hoyle and his family took home the prestigious Chairman’s Award for their ten year dedication to the Charity and to recognise their Pedal for Pounds success through the football club.

Pedal for Pounds was the brainchild of Dean Hoyle and his family, and now in its tenth year, the annual cycling event has reached an incredible £2.2million fundraising milestone.

Dean and Janet Hoyle collected the award on the evening, presented to them by Yorkshire Air Ambulance chairman, Peter Sunderland.

Peter Sunderland, said: “Dean, Janet and the boys have been truly inspirational in helping to raise a phenomenal amount of money for our charity over the last decade, and helped raise the profile of the Yorkshire Air Ambulance through the highly successful Pedal for Pounds campaign and their work with HTAFC.  Just last week we were delighted to announce that the campaign hit the £2 million mark raised. It was my absolute pleasure therefore to be able to recognise all their hard work with this year’s YAA Chairman’s award.

It is the continued support and generosity from people like the Hoyle’s, which enables us to keep saving lives across not only across Huddersfield but the wider Yorkshire area and we’re proud to have them as part of our Yorkshire Air Ambulance family. ”