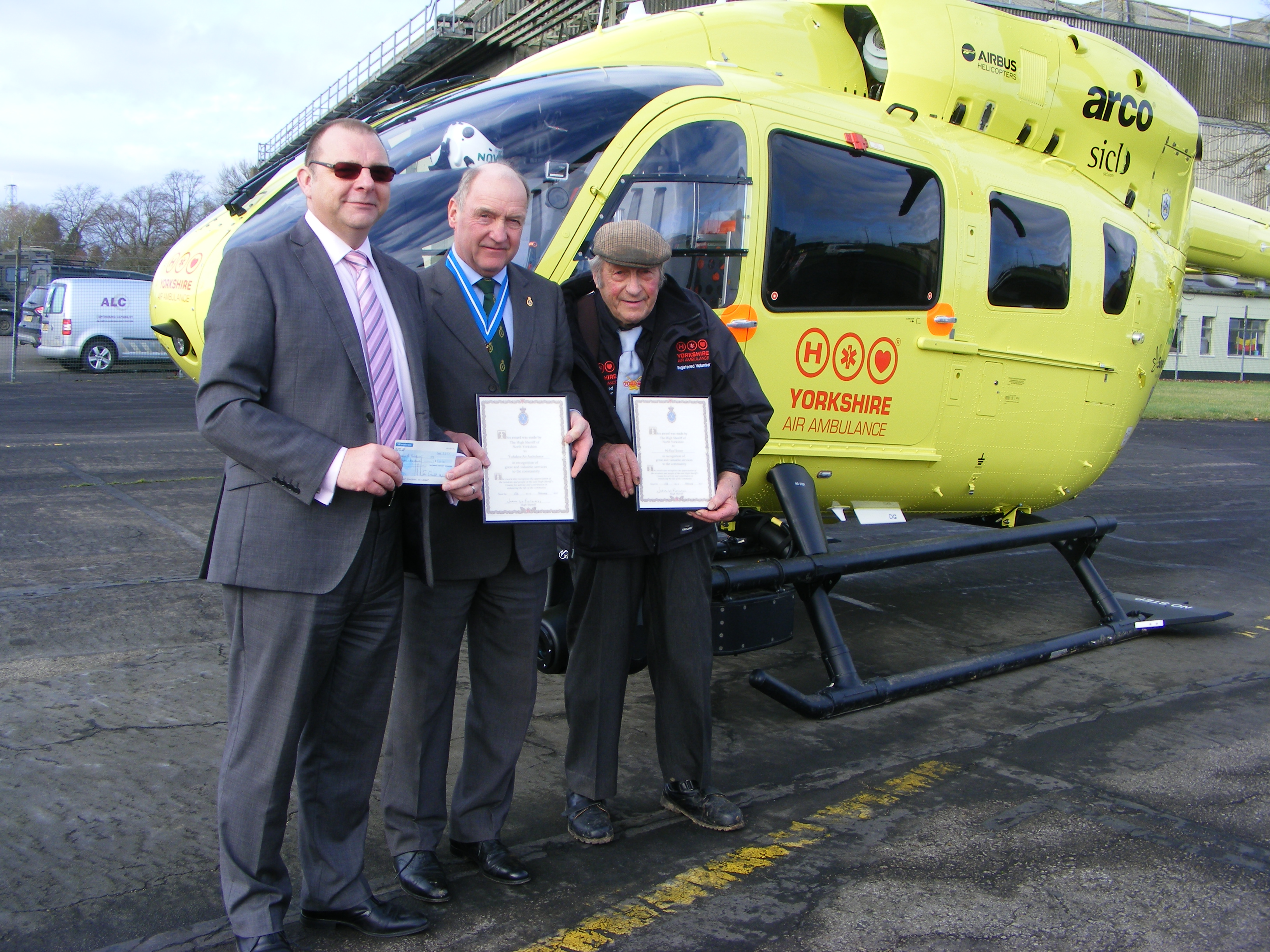 Ken Horner, 84 from Follifoot near Harrogate, has been volunteering for the Yorkshire Air Ambulance for over 15 years now.  The retired joiner and wheelwright has now raised in excess of £50,000 for his favourite Charity since he started fundraising in back in the early 2000’s.

His dedication and fundraising efforts were recognised by both the Charity and the High Sheriff of North Yorkshire, John Furness, at a presentation at the YAA’s Northern Airbase at RAF Topcliffe near Thirsk last week.  Ken was presented with an award, along with a cheque for £250 for the Yorkshire Air Ambulance and £100 for himself.

The High Sheriff commented “I have known Ken for a number of years, whether at Point to Points or Horse Shows, selling his country items and walking sticks but had never realised what a huge amount that he had raised over the years for the Yorkshire Air Ambulance. I am delighted to give him a ‘High Sheriff Award in recognition of the great and valuable services to the community’. I still have a Shepherd’s Crook that I bought from Ken some considerable time ago. It is a faithful companion when out walking in the countryside”

Ken has raised money over the years by different farming related fundraising initiatives.  The majority his monies raised have come from the hand-made walking sticks and Shepherds crooks he carves himself using materials he collects.  He also hosts an annual fundraising dinner each October and has been involved with farming auctions over the years also.

Ken commented “I have known the High Sheriff for many years through the local agricultural community.  I thought I had been invited to Topcliffe to see the new helicopter so I was totally surprised and overwhelmed when John presented me with my award.  I love helping the Yorkshire Air Ambulance and don’t do it for the credit.  I do it knowing that I am helping others who might need the services of the helicopter and its crew.  It was a brilliant day and I was so pleased with my award.  It means so much to me.”

The Yorkshire Air Ambulance is an independent charity providing a life-saving rapid response emergency service to 5 million people across the whole of Yorkshire. The service is operational seven days a week, 365 days a year and needs to raise £12,000 every day. The Charity currently attend over 1,000 missions a year, an average of 3 incidents every single day.   They have recently taken delivery of two brand-new state of the art Airbus H145 helicopters to enhance the service they provide to the people of Yorkshire.

Helen Callear, Regional Fundraising Manager for the YAA also added “It was such a pleasure and delight being able to watch Ken receiving this very special award from the High Sheriff.  Ken is such a well-respected man in our area and a real credit as a volunteer to the Yorkshire Air Ambulance.  We are so grateful to him for raising such a huge amount of money for us over the years.  He is a very special man indeed and fully deserves to receive this award.”

Being a volunteer is a really great way to get out and about in your local area and meet people. Volunteers can do as little or as much as they want, to fit in with their lifestyle.  The Charity is always on the look out for new volunteers in the North Yorkshire area.