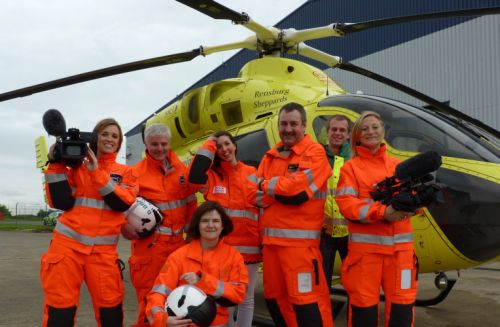 The team that produced the hit BBC Helicopter Heroes series, following the work of the Yorkshire Air Ambulance, has won a major award.

Led by Network Editor Ian Cundall, who picked up the award with Series Producer Andy Joynson, the team has made 130 programmes over eight years with the rapid response emergency charity.

All are qualified aircrew, able to navigate and operate the communication system on the YAA's two MD 902 helicopters. They have flown more than 3,000 HEMS (Helicopter Emergency Medical Service) missions.

In recommending them for the award Capt Lister said: "The team’s work has contributed to greater public understanding of many issues facing HEMS crews …they've shown a very high level of commitment to flight safety and members have displayed high standards of airmanship throughout their time with the YAA.

"In a world where journalists are often criticised for their lack of understanding of aviation issues and, sometimes, a tendency to over-dramatise on TV, the Helicopter Heroes team is a shining exception. Few journalists or broadcasters can justifiably claim to have helped others save lives in the air."

The Guild is one of most influential bodies in world aviation and the annual Air Pilot awards honour outstanding courage, achievement and the highest standards of airmanship around the world.

Alongside the Helicopter Heroes team at the prestigious ceremony at London's Guildhall were the crew of a Cathay Pacific Airbus flight who saved their aircraft after a double engine failure and a RAF Chinook chopper team who braved sustained gunfire to rescue soldiers surrounded by Taliban insurgents in Afghanistan.

Ian Cundall, who received the Award for Aviation Journalism from HRH Prince Michael of Kent, said: “We are truly honoured to have been nominated by the Yorkshire Air Ambulance to be receive this amazing award.

“Helicopter Heroes has been a real labour of love for all those who have worked on the programme.”

Among those also receiving Air Pilot Awards were military aircrew, test pilots, flying instructors, private pilots and newly qualified trainees. All have been chosen by fellow pilots for their commitment to the highest flying standards.

The Yorkshire Air Ambulance has carried more than 5,800 people in its 14-year history and has to raise £9,990 every day – that’s £3.6 million a year – to keep the life-saving service going.