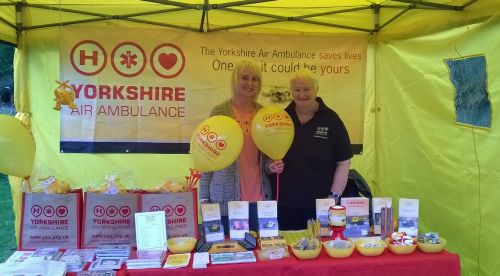 Yorkshire Air Ambulance is appealing for more volunteers in the Todmorden area to help them raise more awareness and funds.

The distinctive yellow helicopter is an increasingly regular feature in the local skies. Last year 14 people living in or visiting the Todmorden area were flown to hospital by the emergency rapid response charity.

Yorkshire Air Ambulance (YAA) West Yorkshire Regional Fundraiser Kerry Garner said: "We are attending an increasing number of incidents in the Calder Valley area and volunteers play a pivotal role in raising awareness and making it as easy as possible for people who want to support us.

"It’s important that we’re out more in local communities making sure we have a presence at local events, telling people what we do, and why their support is so vital.”

The emergency rapid response charity – which has to raise £9,990 every day to keep its two helicopters flying – is looking for volunteers to help in a variety of ways – from running stalls and attending events to giving talks and collecting tins.

Janet Wright, from Todmorden, has supported the YAA for many years and became a registered volunteer for the charity three years ago.

“Local people really appreciate having the Yorkshire Air Ambulance as the nearest hospitals are over 20 miles away by road,” said Janet, 61, from Woodfield Street.

"The speed that the helicopter can reach people and then take them to the best hospital for their injury or illness is just fantastic.

“I know some people say the Government should pay for the service but this is such a brilliant local charity.”

Janet previously supported the YAA by selling charity merchandise in her Todmorden café. Now retired she has more time to help and added: “Volunteering is very rewarding and you get to meet some lovely people. You can do as much or as little as you want and your efforts are really appreciated.”

The charity is looking for individuals, couples or small groups of friends to become community event fundraisers, running stalls at local events.

There is also a need for public speakers to give talks to local groups, schools, clubs and organisations as well as volunteers to accept donations on behalf of the YAA and make a small speech when required.

You could also help the charity by doing supermarket collections and bag packing or managing collection tins and information points in your area.

A full introduction is given to any new volunteers as well as training. If you would like to find out more about volunteering contact Lisa Blezard by email l.blezard@yaa.org.uk or by calling Lisa on 07876 899 097.

Yorkshire Air Ambulance has carried more than 5,700 people in its 14-year history. The charity needs to raise £9,990 a day to keep its two helicopters in the air – equivalent to £3.6 million each year.