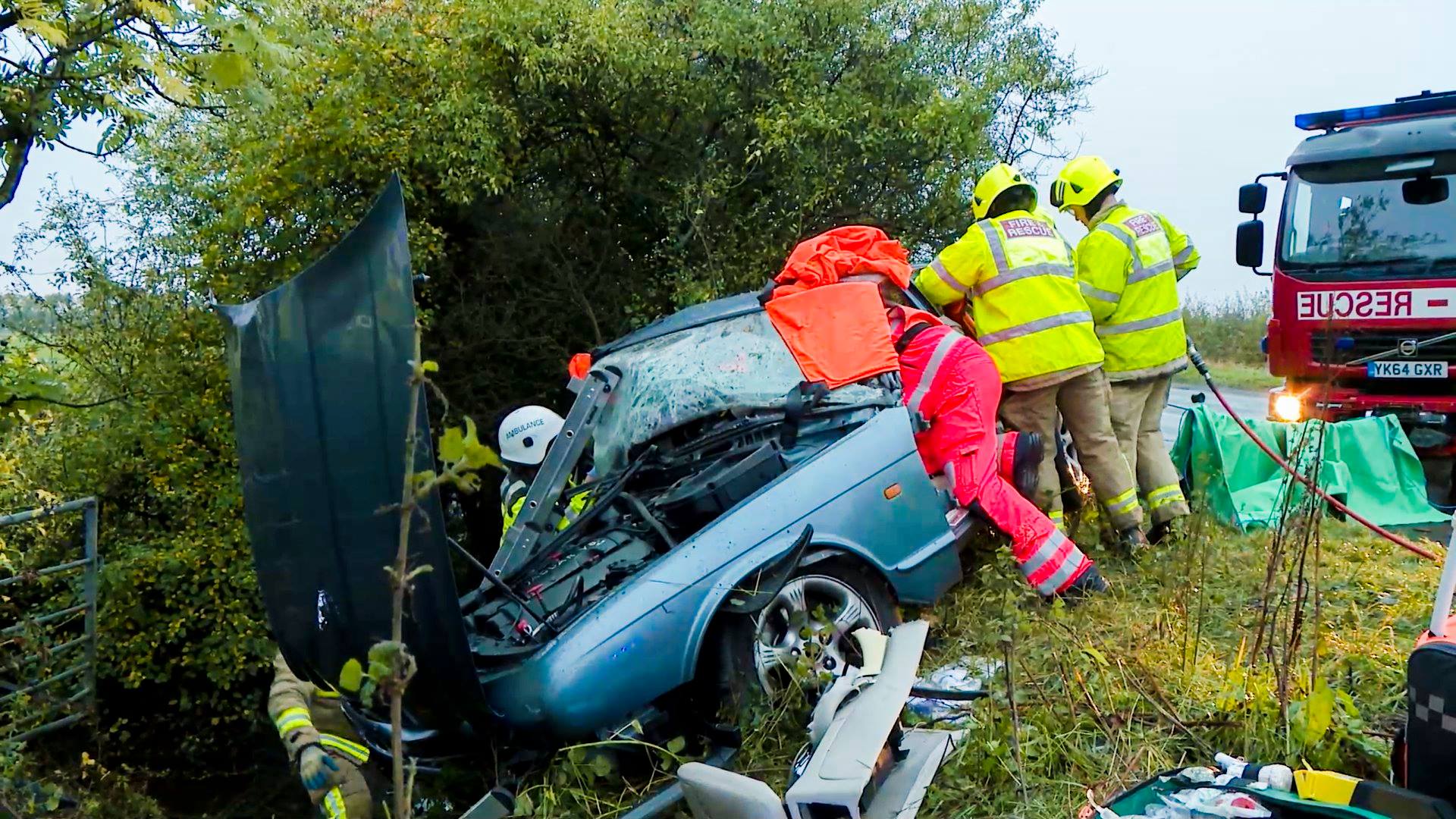 The YAA documentary series Helicopter ER, providing an insight into the vital work of the Yorkshire Air Ambulance is to air a special Critical Hour episode next week detailing one real-life emergency minute by minute with first-hand commentary from the crew who were on the frontline.

On 15th October 2018, Aaron Hill, a bus driver from York, was driving to work in his vintage Jaguar, when his car skidded in the wet weather and careered off the road into a ditch.

The impact of the crash immediately shattered both his thighs and trapped both of his legs and an array of emergency service personnel had to work against the clock to extract him, in fear that he would lose both his legs.

The Yorkshire Air Ambulance was deployed to help Aaron, which included a team of specialist medics. Dr Brian White, an off duty YAA Consultant and a member of BASICS, an association of doctors that respond to emergencies in their spare time, rushed to the scene.

Al Day, YAA HEMS Paramedic who treated Aaron, said: “One of the things about working on the air ambulance is that time is really important and one of the biggest advantages of having a helicopter is that you can get to the scene of an incident quickly.”

Dr Brian White, YAA HEMS Consultant, said: “When I got there, it wasn’t carnage, but you could see the huge amount of energy being transferred into this car which was deformed. It was laying on its side and the gulley to access it was very difficult. Having a look in, I couldn’t see where his legs were going. The gearbox seemed to be moulded around them.”

“It’s really difficult arriving on scene and seeing someone trapped in pain and not being able to do anything until he is extricated. The longer he was trapped, the more concerned I was getting. He wasn’t bleeding torrentially, but a slow bleed could have still translated into Aaron suffering a cardiac arrest”, he continued.

After being trapped for several hours and extracted by the fire service, a decision was made to fly Aaron to Leeds General Infirmary.

Tests at the hospital revealed that Aaron had broken his thigh bone, vertebrae in his spine and sustained neck and skull fractures. Doctors battled to save Aaron’s foot, but unfortunately, it had to be amputated.

Speaking of his injuries, Aaron said: “The road to recovery was long and rough. I was in Leeds General for Infirmary for around a month and I was told that I would be bed bound for nearly a year and I just wouldn’t have it, so I got myself a wheelchair and started moving as much as I can.

The longer half of my leg was partially severed. The doctors made a big effort to save as much as they could, but after a couple of days, they said they would have to start operating. I made the decision to lose my foot because I was told by a lot of experts that it would be very specialised to have a prosthesis made up for just a small portion of my foot. I just said take everything off so I can get back to normal as quickly as I can.”

Aaron defied medics and has now learned to walk again, drive again and he’s now back to work as a bus driver.

Speaking of the Yorkshire Air Ambulance, Aaron said: “Easingwold was part of my bus route and I used to see bucket collections for the YAA and spare the change from my lunch.  Little did I know that I would need them in the near future. It must have been a horrible day for them. They turned up and made some very difficult decisions, but I’m here today. I have a huge amount of respect for the emergency services. You never realise how much you need them until you have an incident.”

The episode airs on Channel Really at 10 pm on Tuesday 20th April.