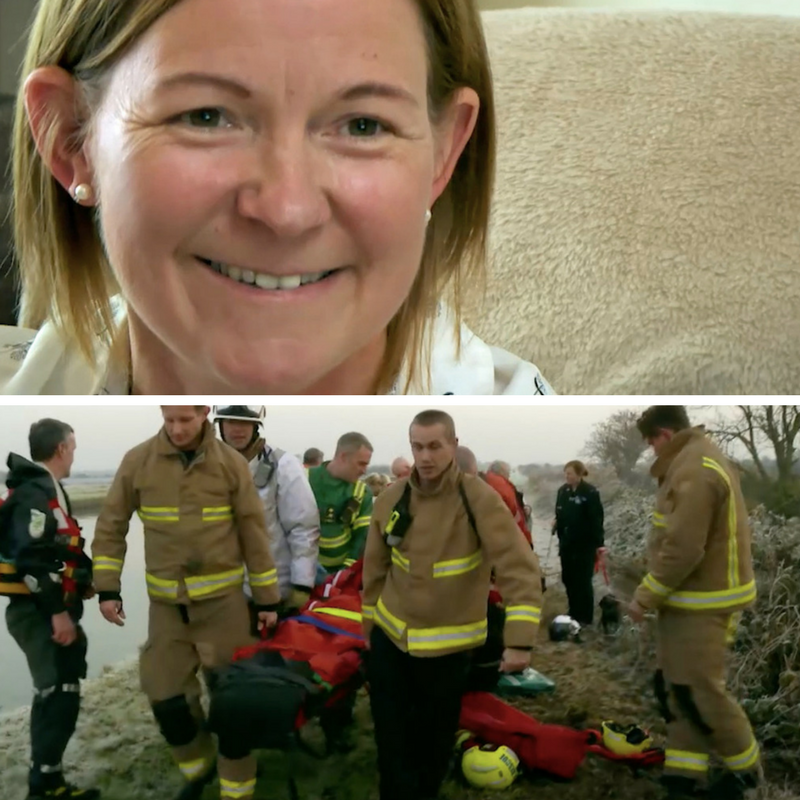 Sarah Drayton was walking her two dogs by the Aire and Calder Canal near her home in Pollington, near Goole, on a freezing morning last winter when her German wire haired pointer puppy Daisy fell into the icy water.

“As we passed another dog walker Daisy had slipped out of her harness and went into the water. I over-reached trying to get her out and then I fell in too,” said mother-of-two Sarah.

Her fellow dog walker Wendy Butt, 75, tried to help Sarah out of the water but without success. “It was about 15ft deep and the sides are sheet metal and I just couldn’t get out and Wendy didn’t have the strength to pull me out either.

“We managed to fish Daisy out and I managed to get my toes onto a ledge but the water was still just under my neck.”

After phoning for help, Wendy stayed with Sarah at the remote location, keeping her spirits up and holding a scarf which was supporting Sarah in the water under her armpits. Both held on for over 45 minutes until emergency services arrived.

“When you are in that situation you just deal with it but when I saw the emergency services coming I did burst into tears,” said Wendy, also from Pollington.

Humberside Fire Brigade got Sarah out of the water and Yorkshire Air Ambulance paramedics helped stabilize Sarah, 41, and start the long process of warming her up, before she was taken to Doncaster Royal Infirmary.

Sarah is planning to run a half marathon for the rapid response emergency service next year and added: “This has highlighted the dangers of canals and I now don’t walk near the edge at all.

“But it has also showed just how important the air ambulance service is particularly in remote areas and I’m just very grateful to them, and to Wendy for all she did on the day.”

Wendy also has very good reason to thank Yorkshire Air Ambulance after a crew was dispatched to her six months later after she broke her ankle on a dog walk.

“It makes you realise how lucky we are to have such services available to us,” she added. “They were brilliant on both occasions.”