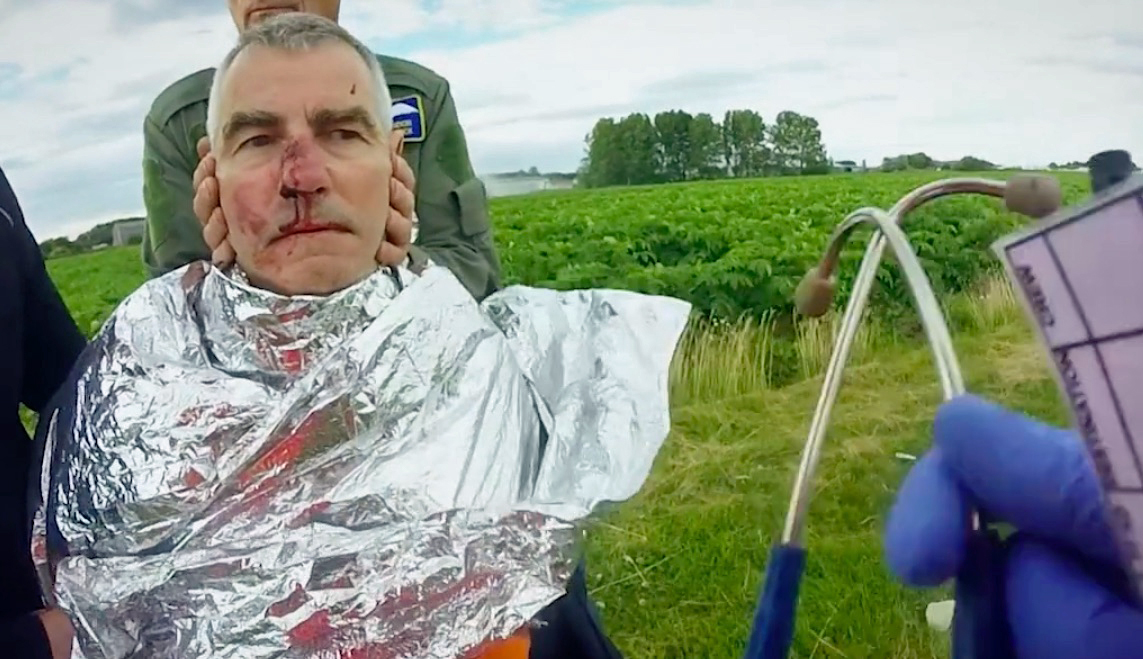 The accident features in Monday’s episode of Helicopter ER, the UKTV series which follows the life-saving work of Yorkshire Air Ambulance.

Les, from Wheldrake, was a front seat passenger in the helicopter which was carrying four passengers when it crashed at a vintage aircraft weekend run by the Real Airplane Company at its Breighton base.

The decision to take the ten-minute flight was a last minute one near the end of the day. “It was just an unfortunate combination of small things which, singularly, would not be a problem,” said Les, an experienced fixed wing and commercial helicopter pilot.

“But, when they come together – like the holes in a Swiss cheese lining up – you have a problem. I just remember there was a loud crack and one second I was looking at the sun and the next at shadows with the ground coming up really quickly.”

Les and the helicopter pilot and good friend Nigel Feetham were both airlifted to hospital by Yorkshire Air Ambulance. Les was treated at Hull Royal Infirmary for injuries including a fractured sternum and three fractured vertebrae.

Mr Feetham, from Hedon, East Yorkshire, suffered similar injuries and was taken to Leeds General Infirmary where he seemed to be making a good recovery but tragically died eight days later.

Vintage aircraft enthusiast Les, 60, had to wear a spinal brace for three months and endured a painful recovery but is back flying the vintage aircraft he loves.

Breighton Airfield, a former Second World War heavy bomber base and cold-war nuclear missile launch site, is home to the classic aircraft collection of the Real Aeroplane Company and the Real Aeroplane Club, an active flying club whose members own and operate unusual, classic and ex-military aircraft.

Les, and other members of the Club, as well as family and the many friends of Mr Feetham, have so far raised more than £16,000 for Yorkshire Air Ambulance to thank the rapid response emergency service.

Les, a former car body repair shop owner, added: “The air ambulance is just a fantastic charity. You never know when you, a friend or family member might need them but when you do they are just brilliant.

“As they are not Government funded it’s really important that people support Yorkshire Air Ambulance. I cannot speak highly enough about the pilots, paramedics and doctors and what they do every day.”

Both Yorkshire Air Ambulances attended the crash scene and their role is highlighted on Helicopter ER at 9pm on Monday, September 11, on Really.

The episode also features a couple on a cycling holiday in the Yorkshire Dales who were catapulted 30ft after a collision with a van and a man who suffers a serious head injury following a fall from scaffolding.