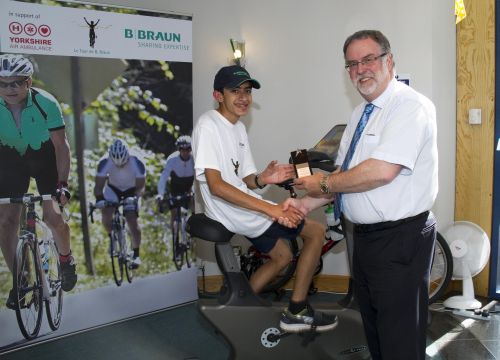 Staff at a Sheffield-based healthcare firm have beaten their own charitable Tour de France target – by miles!

During the three-week period of the international Tour de France, staff pledged to cycle a chosen distance on a static bicycle to make up part of the route across B. Braun UK locations, taking in Sterilog and Avitum UK sites including Pudsey, Gloucester and Cardiff.

But after staff got into the cycling spirit, they ended up taking the challenge up a gear by clocking up more than 1400 miles.

The Braun team also raised £4000 for YAA after work experience student Aleem Zaman cycled for an hour and raised sponsorship of £560 from his family, friends, school and neighbours – the most an individual raised throughout the ‘tour’. The 14-year-old was presented with a trophy in recognition of his outstanding feat.

Group Chief Executive of B. Braun Medical Ltd, Hans Hux, said: “Employees of all fitness levels were able to get involved in this event and I am so impressed with the team – they smashed their target several days before the end of the challenge.

“Aleem was the last rider to take to the saddle and it is very fitting indeed he brought the challenge to such an exciting close by raising so much money for the Yorkshire Air Ambulance – a much-valued rescue and emergency regional resource of which B. Braun is a long-term supporter.”

Abby McClymont, YAA Marketing and Communications Manager, added: “We are delighted the ‘Tour de B Braun’ has been such a success and would like to sincerely thank all the B Braun staff that took part in the challenge.

“A special thank you and well done should also be given to Aleem for his sterling efforts with his fundraising. B. Braun Medical Ltd are our longest standing corporate supporter and they continue to overwhelm us with their fundraising efforts.”

Based in Chapeltown, Sheffield, B. Braun Medical Ltd is a member of the B. Braun Group, one of the world’s leading healthcare companies.

The healthcare firm is currently celebrating its 175th anniversary with a fundraising appeal for YAA. The 175 Campaign encourages people across the region to donate a minimum of £1.75 each between July and December to support the work of the YAA.