Have A Christmas Clear Out For Yorkshire’s Helicopter Heroes 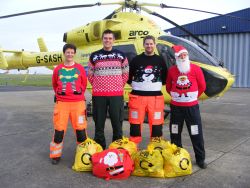 Yorkshire Air Ambulance has made a festive fund raising plea to fill a Christmas recycling sack for the region’s Helicopter Heroes.

The rapid response charity is calling on people to have a Christmas clear-out of unwanted clothes, shoes, bags, curtains and bedding and donate it through their successful recycling campaign.

“The lead up to the festive season and the Christmas period itself is a really good time to have a clear-out of those wardrobes and drawers,” said YAA Partnership Manager Katie Collinson.

“So we’re asking people if they will make us a gift of their unwanted items – whether it’s that dodgy Christmas jumper or slippers, or that dress that’s been hung up for years but is never worn. It’ll be an ideal Christmas present for the YAA!

“We work closely with our recycling partner BIU Group and since we launched our recycling scheme back in 2005, over £1million has been raised through recycling across the region – recycling is worth around £300,000 per year to the Charity and is a valuable sustainable income stream for us.

“So filling a recycling sack is a Christmas gift that doesn’t cost people any money but means so much to us.”

Yorkshire Air Ambulance, which provides a rapid response emergency service to 5million people, needs to raise £9,990 each day to keep its two helicopters in the air and maintained – that is equivalent to £3.6 million a year.

The charity has over 250 textile recycling banks at household waste sites, supermarkets and car parks across the county.

You can find out where your nearest bank is by either going to the BIU Group website (www.biugroup.co.uk) and clicking on the Bank Locator icon or by calling 01422 418 618.

The YAA operates two helicopters from bases in West and North Yorkshire and in its 13-year history has transported more than 5,200 patients.