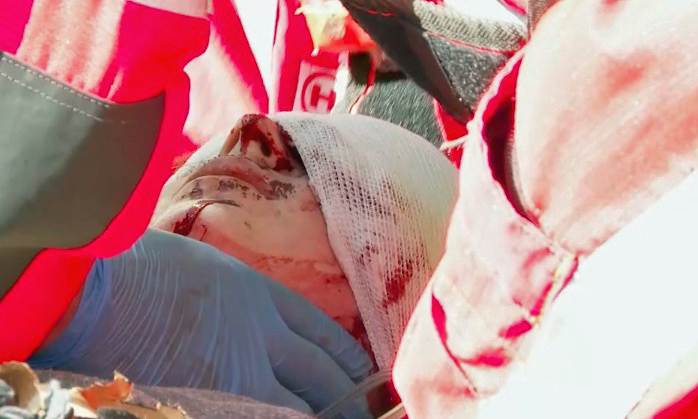 A young Harrogate woman is rebuilding her life after suffering major face injury in a road accident.

Georgia Meyer, 20, was the front seat passenger in a car which left the A61 near Ripon last June and crashed into a telegraph pole. The impact caused a deep wound across the right side of her face which only narrowly missed her eye.

An off-duty paramedic bandaged Georgia’s face before Yorkshire Air Ambulance paramedics arrived. The medical team struggled to stem the bleeding and she was airlifted to specialists at Leeds General Infirmary where she underwent major maxillofacial surgery.

“I don’t really remember the crash and at first I did not feel the pain as I had sliced through lots of nerves in my face, but when they were trying to stop the bleeding it was agony,” said the former pupil of St John Fisher School, Harrogate.

“The air ambulance paramedics were really great at the scene and then checked up on me after I had had the operation to make sure I was Ok which was lovely. In fact, all of the NHS doctors and nurses were just amazing.”

It’s been a long road to recovery for Georgia coping with both the physical and mental scars of the accident, with many hospital visits and counselling.

But brave Georgia, who had previously dropped out of university, has been determined to turn her life around and has just completed the first year of a Criminology with Psychology degree courses at Leeds Beckett University.

She added: “It has taken me a full year to properly recover. I used to get really bad panic attacks and stress out, especially when people touched my face, but counselling has helped and I try not to let the scars get me down.

“I’ve got a great family and friends and going back to university was the best decision I could have made. I would really like to work either in prisons on rehabilitation programmes or do youth counselling.

“Although the scars are a bit of a reminder I try not to let it get me down and I know there are options such as laser treatment if I want a little later on.”

Georgia’s accident features in the first episode of a new series of Helicopter ER, the award-winning UKTV programme which follows the life-saving work of Yorkshire Air Ambulance.

The third series starts on Monday (July 23) at 9pm on UKTV’s Really channel. The episode also features a vet left paralysed after being attacked by a bull he was treating and a landing on the 18th hole of a golf course to treat a player who suffers a heart attack.