↓ Skip to Main Content
Home / News / Generous Huddersfield Town supporters raised another £232,007 for the pioneering Keep It Up campaign during the 2016/17 season.

Generous Huddersfield Town supporters raised another £232,007 for the pioneering Keep It Up campaign during the 2016/17 season. 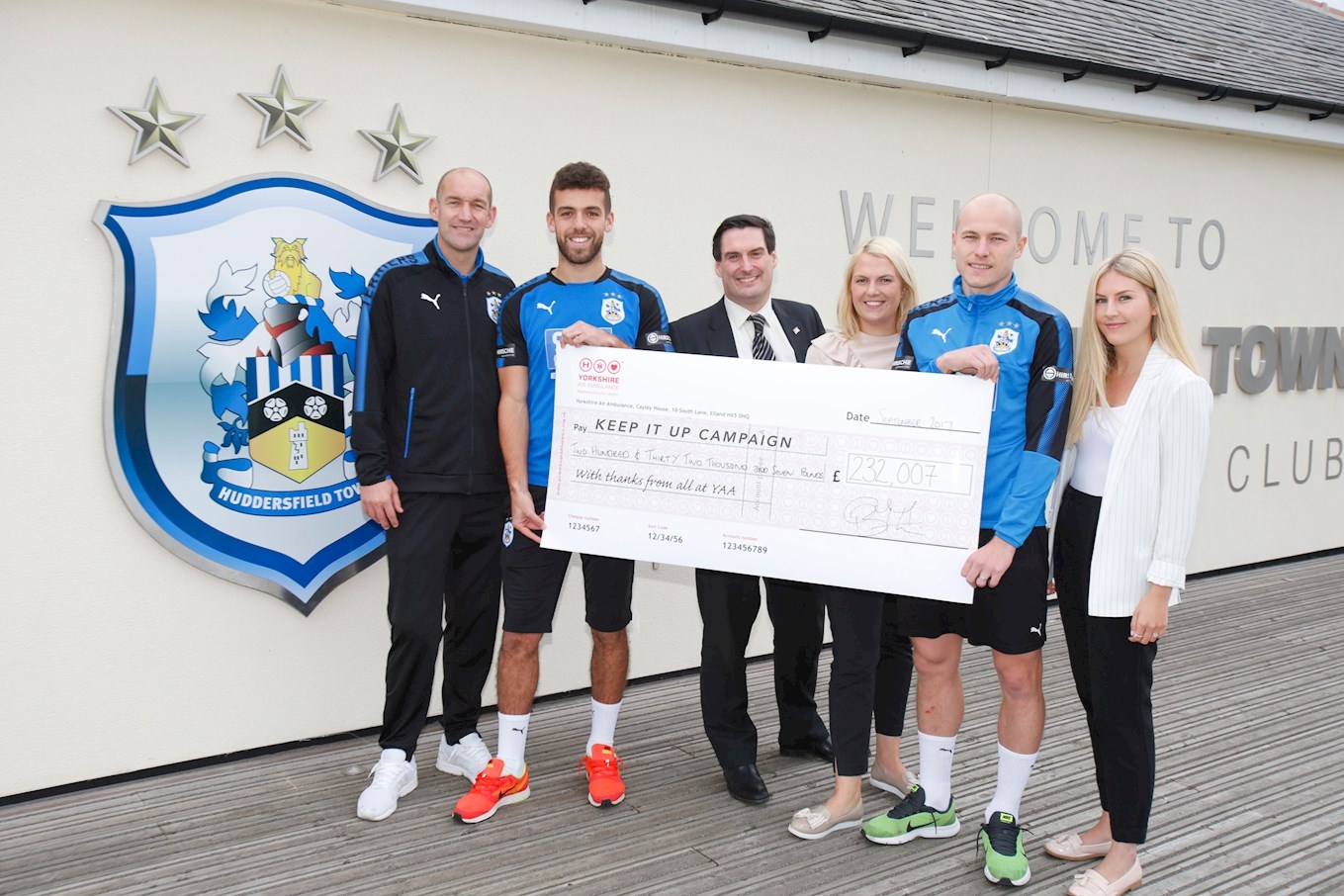 – Another £232,007 raised for the ‘Keep It Up campaign’
– Total for the charity campaign now tops £1.7 million
– Money is evenly split between the Yorkshire Air Ambulance and Town’s Academy

Generous Huddersfield Town supporters raised another £232,007 for the pioneering ‘Keep It Up’ campaign during the 2016/17 season.

That takes the ‘Keep It Up’ campaign’s fundraising total to over £1.7 million since its inception in 2009, with the money being split evenly between the Yorkshire Air Ambulance and the Huddersfield Town Academy.

Most of last season’s funds were generated by the latest instalment of ‘Pedal for Pounds’; the P4P8 ride known as the ‘Wagner Way’ as Huddersfield Town fans and Yorkshire Air Ambulance supporters cycled from David’s old club Dortmund to Huddersfield. Those cyclists – combined with the teams that undertook the challenge from ‘Hull to Home’ – earned £189,369 for the fundraising campaign. Huddersfield Town and the YAA would also like to thank Made by Cooper who sponsored the P4P8 event.

The remainder of the funds were generated by the initiatives of individual supporters, who made one-off donations or created bespoke events, and through the ‘Bag It Up’ recycling scheme.

The Yorkshire Air Ambulance’s Director of Fundraising Garry Wilkinson and Partnerships Manager Katie Collinson visited PPG Canalside to celebrate the latest addition to the fundraising total. They are pictured with Town players Tommy Smith and Aaron Mooy, as well as Andy Booth and Robyn Kennerdale; both key figures in the fundraising campaign.

“I’m so proud of the generosity of the people of Huddersfield – and particularly Huddersfield Town fans – when it comes to the ‘Keep It Up’ campaign and this latest addition to the total is truly staggering.

“Events like P4P8 are always fantastic fun, but equally it’s important to keep in mind why we undertake these challenges and the money raised from these events genuinely helps the Yorkshire Air Ambulance save lives across our region.

“I would like to thank everyone who has taken part in a ‘Keep It Up’ event or has donated whatever they could to the cause, both personally and on behalf of the Club.”

“We never failed to be amazed by the generosity of the Huddersfield Town fans and their supporters.

“We are genuinely grateful to everyone that has participated or supported events for the ‘Keep It Up’ campaign.

“Our partnership with Huddersfield Town continues to go from strength to strength and it really is a privilege for us to work alongside such a fantastic team.”

For those hoping to get involved in the next KIU campaign event, keep checking htafc.com this week for more details!