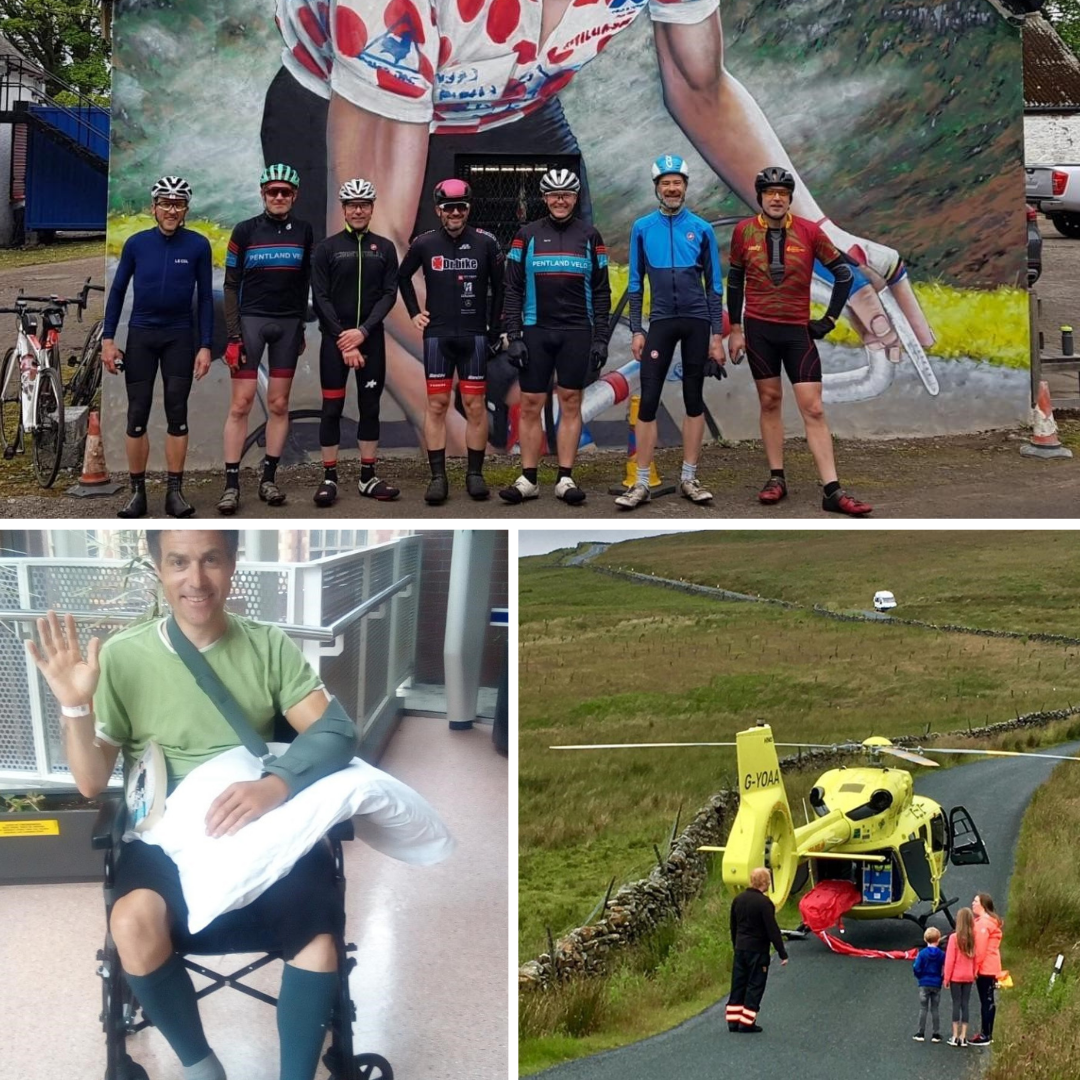 A former Yorkshire Air Ambulance patient is set to embark on a Leeds to Edinburgh cycling challenge to raise vital funds for the heroes that rescued him.

On July 20th 2019 Chris Howie from Edinburgh had a cycling accident while cycling the ‘Etape Du Dales’ route on a cycling holiday with his friends.

It was a very wet day and during a fast descent, Chris lost control of his bike and it slipped on a cattle grid. He landed heavily on the ground.

Speaking of his incident, Chris said: “I was lying on the road for over an hour because we couldn’t get any signal to call the emergency services. Eventually, a few people were flagged down in their cars and they were able to help us. I was in a huge amount of pain and in a really bad way. I didn’t know what was happening with my arm.

I felt like I was battling to stay alive, every minute felt like an eternity and when the air ambulance arrived, it was finally the noise I had been waiting for. It was such a relief and I knew I was going to make it. At the time, it was the best sound in the world.”

The Yorkshire Air Ambulance assessed Chris on-scene and he was flown to Leeds General Infirmary for further treatment. Tests revealed that he had badly broken his arm and Chris endured multiple surgeries to fix it, including a bone graft.

After a couple of weeks in the LGI, Chris was transported by ambulance to Edinburgh, where he stayed in the hospital for a few more weeks. It was the ambulance journey from Leeds to Edinburgh that sparked his fundraising idea.

“I was told I wouldn’t walk for six months or cycle for a year and I might not ever race my bike again. It was a very difficult time, but the care I received was wonderful and I hope that by fundraising I can show my gratitude in a manner that might help others”, said Chris.

He continued: “The journey from Leeds to Edinburgh in the ambulance seemed quite epic, so I thought it would be a good challenge to do it again but on my bike this time, and in one day. My recovery was quicker than expected and I’m confident I could achieve this now- with the right wind!”

Chris and nine friends will set off on his epic challenge on Saturday 19th June. He will start at the Leeds General Infirmary Jubilee Wing with Simo Turner, an anaesthetist he befriended when he was staying at the hospital and he’s hoping to reach Edinburgh by 3 or 4am the following day.

Jenny Jones, South and West Yorkshire Fundraising Manager for Yorkshire Air Ambulance, said: ” We would like to wish Chris and his friends the best of luck in his epic cycling challenge from Leeds to Edinburgh.

It costs £12,000 a day to keep both of Yorkshire’s air ambulances maintained and in the air and all of the support we receive is truly appreciated and will help us continue saving lives across the region.”

To support the Yorkshire Air Ambulance and to donate to Chris’ Virgin Money page, check out: https://uk.virginmoneygiving.com/fundraiser-display/showROFundraiserPage?userUrl=ChrisHowie4&pageUrl=1