Former patient raises £4.6k for the Yorkshire Air Ambulance walking from Halifax to the LGI 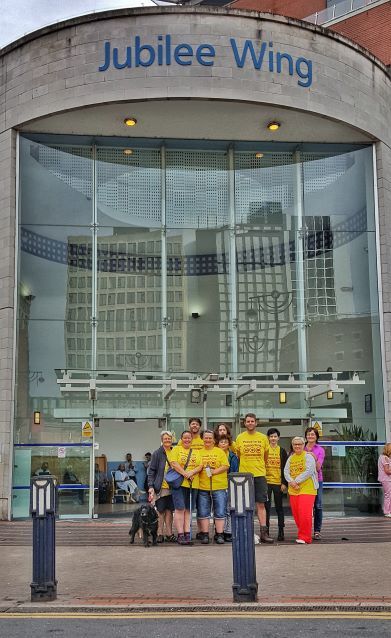 A former patient of the Yorkshire Air Ambulance has raised an incredible £4.6k walking the route from the scene where he had his accident back in 2017, to the hospital he was airlifted to.

Sam Bolton- Gould, 51 from Halifax, was commuting home from work on a bicycle, when a bus pulled out a T-junction and Sam’s bike went into the side of it, causing him serious injuries.

The Yorkshire Air Ambulance flew Sam to Leeds General Infirmary, where it was revealed that he had sustained serious head injuries and had to endure a 10 hour operation to fix his fractured skull.

Keen to give back to the service which helped save his life and also gain closure from his accident, Sam embarked on a sponsored walk to raise money for the Yorkshire Air Ambulance in August 2018.

Four people took part in the 10 hour walk along the A58 from Halifax to Leeds, including Sam and his wife Tess and two of their close friends. Their two sons joined in at the end to walk to the finish line.

The walk, along with other fundraising activities such as a raffle and donations from friends, raised an incredible £4,644.32 for the charity.

Sam said:”I have been amazed by how generous people have been and the support we received during our fundraising. Our initial goal was to raise £3,000 but we managed to beat our target by a further 50%.”

“It was great to see people cheer us on along the walk and support us through to the finish line – it just goes to show how greatly appreciated the Yorkshire Air Ambulance is in our area. We would like to thank everyone for their generosity.”

Jenny Jones, Regional Fundraising Manager for West Yorkshire, said: “A huge thank you to Sam for raising an incredible £4.6k. His donation will help tremendously towards the vital funding of the Yorkshire Air Ambulance.”