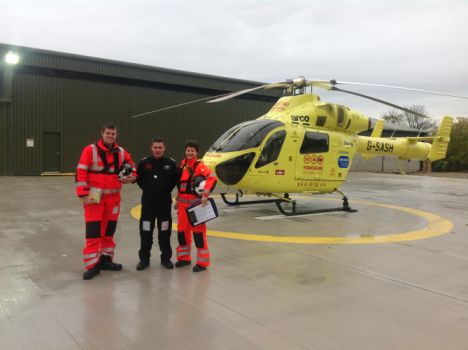 The Yorkshire Air Ambulance have today flown their first mission from the Charity’s new state-of-the-art air support unit at Nostell Priory near Wakefield.

The rapid response helicopter was called to a road traffic collision involving a male cyclist and a vehicle in Holmfirth near Huddersfield and flew to the scene of the incident in only 9 minutes.

However the patient subsequently travelled to hospital by land ambulance after his injuries were not life threatening.

Yorkshire Air Ambulance has relocated one of its two helicopters from its existing base Leeds Bradford Airport to the purpose-developed air support unit in the grounds of the Nostell Estate.

The move will enable the charity to improve its coverage and response times to patients in the west and south of the county, with its second helicopter continuing to operate from its base at RAF Topcliffe near Thirsk, covering the North and Eastern part of the region.

As well as benefiting from an enhanced location, the Charity will have larger hangar space for its helicopter, on-site accommodation, a dedicated fuel bowser, helipad facility, improved office facilities and greater space in general.

The new location will mean better operational availability for its aircraft given the lower altitude of Nostell compared with previous base at Leeds Bradford Airport which was often affected by fog at various times throughout the year.

The Charity will see some cost savings as a result of the move which will come from having on site accommodation and buying fuel directly from the supplier.

Peter Sunderland, Chairman of the Yorkshire Air Ambulance explains: “This relocation to Nostell is a major step forward for Charity. It will enhance our service across the region, improving flying times to all areas and creating an operational overlap in our busiest areas.

“We are located on an independent site with a long-term lease which gives us stability and the opportunity to deliver an even better service to the people of Yorkshire.”

The development has seen the conversion of a pre-existing warehouse into a helicopter hangar, the creation of a landing pad and fuel area plus new offices, communications area and air crew accommodation.

Nostell will be manned 365 days a year and emergency flights will only take place during daylight hours, in line with CAA (Civil Aviation Authority) and planning ruling.

The independent charity provides a rapid response emergency service to five million people across Yorkshire – England’s largest region. It needs to raise £9,990 each day to keep its two helicopters in the air and maintained.

With no direct government funding the only help the charity receives is the provision of their paramedics from the Yorkshire Ambulance Service NHS Trust.

In its 13-year history the YAA has transported more than 5,200 patients to hospitals across Yorkshire. Last it its two helicopters flew 933 missions and carried 444 patients – an 18 per cent increase on the previous year.