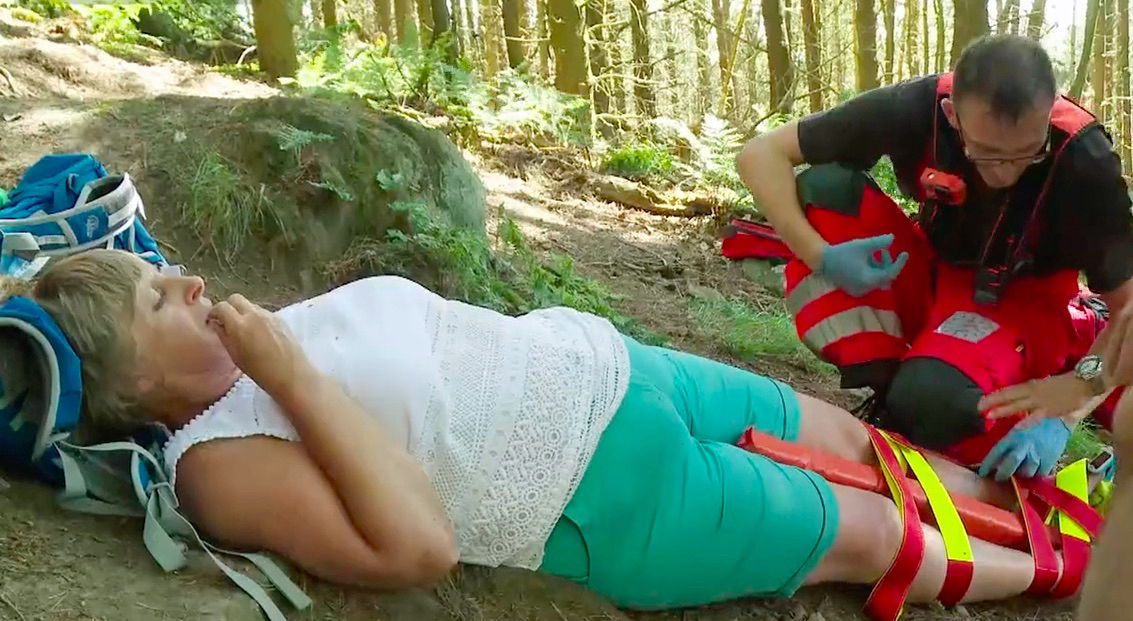 First aid training as a coastguard could have helped Filey man Paul Tyndall to save his wife’s leg after she suffered multiple fractures in a freak accident.

A family Father’s Day walk to Roseberry Topping, near Great Ayton, ended in a dramatic air lift to hospital for Paul’s wife Ann after she slipped when walking down from the Captain Cook Monument. She broke her leg in three places below the knee as well as dislocating her ankle in the fall.

“It was just bad luck, “said 55-year-old Ann. “I had walking boots and poles but it was very steep as we were coming back down through the woods and I just slipped.

“My leg below the knee was at 90 degrees as well as my ankle and I had no feeling in my foot. I take a blood thinning drug for a heart condition and, because of where we were, getting medical help and then getting me to hospital was not going to be easy.

“So, Paul felt he had no choice but to try and straighten my leg. It was very painful for me, but also very traumatic for him, but my surgeon said if he hadn’t done it I could have lost my leg.”

Cleveland Mountain Rescue and Yorkshire Air Ambulance medics got Ann stretchered and, with the help of family members, she was carried to the waiting helicopter before being airlifted to the James Cook University Hospital for surgery on her shattered leg and ankle.

Paul, who has been part of the Filey Coastguard Team for over ten years, added: “It was just awful. I’d never done anything like that before but once Ann said she had no feeling in her foot, I knew her leg needed to be straightened quickly.

“I think you just find strength from somewhere but really I knew I didn’t have any choice. It was very much a relief when the mountain rescue and air ambulance guys turned up.”

Ann, an activities coordinator in a Scarborough retirement living centre, has now fully recovered and is enjoying long walks once more. She and her family are now raising money for the Yorkshire Air Ambulance and Cleveland Mountain Rescue charities.

Paul and their daughter Lucy, who was at the scene with her partner, will be taking part in next month’s Great North Run half marathon. If you would like to support them go to their Just Giving Page https://www.justgiving.com/teams/lucyandpaulgnr

The episode, which airs at 9pm on Really, also follows the efforts to save the life of an elderly pedestrian knocked down outside a GP surgery and a motorcyclist who suddenly collapsed while riding in the Peak District.

Photo caption:  Ann Tyndall being treated at the scene of her accident and being carried to the Yorkshire Air Ambulance aircraft.