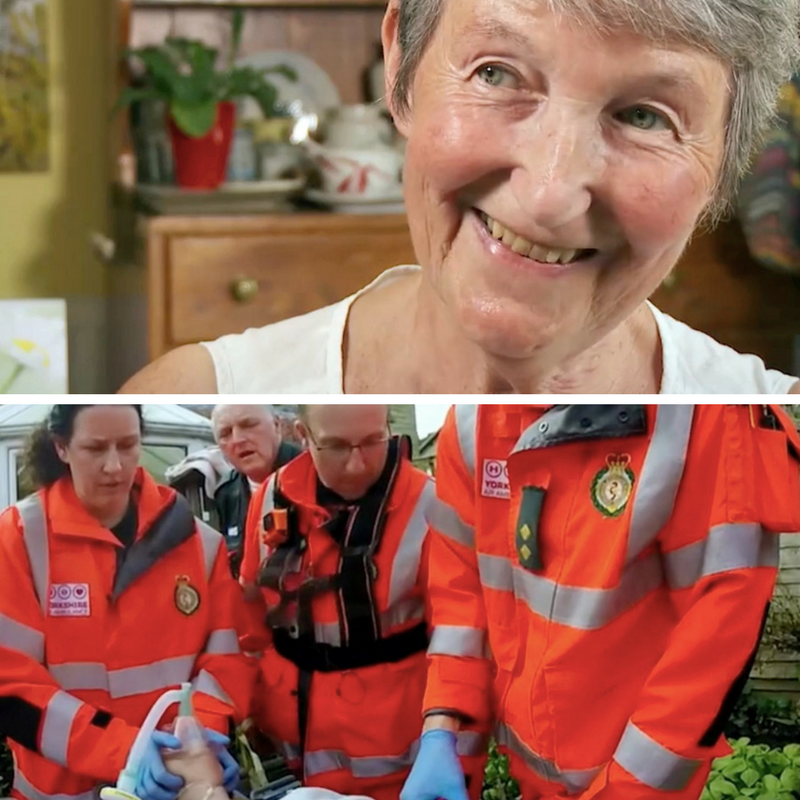 Michael Leng performed CPR on his wife Helen after she collapsed in the bedroom of their home in the village of Ebberston, near Pickering.

His life-saving efforts and those of Yorkshire Air Ambulance crew, paramedics and doctor will feature in Monday’s episode of Helicopter ER, the UKTV series which follows the work of the rapid response emergency service.

Retired head teacher Helen had been out dog walking but returned home early complaining of chest pains. She collapsed in the bedroom of the couple’s home and Michael started CPR just before Yorkshire Air Ambulance paramedics arrived.

She anaesthetized Helen in the couple’s back garden so she could be safely airlifted to the James Cook University Hospital, Middlesbrough, where Helen spent six weeks after surgery to fit a stent in a blocked artery.

“I was at death’s door at least three times in hospital but thanks to the quick actions of my husband doing CPR and the swift arrival of the air ambulance my heart was not badly damaged and once I turned the corner I recovered well,” said Helen, who will celebrate her 70th birthday this week (September 19).

“I’ve had a replacement shoulder as that was somehow dislocated and broken during all the drama and so I’m driving again and pretty much doing all the things I did before.

“It was very hard for MIchael who had nightmares for a while. You never know what is around the corner so you have to make the most of every day and I’m just very grateful for the fact that there are air ambulances and that they are savings lives in Yorkshire every single day.”

Helen visits many people in need in Ebberston as village pastor with the local Methodist Church. Following her heart attack, the village held fundraising events to buy two defibrillators – the first of which is now installed.

She is also the third resident of Ebberston to be airlifted by Yorkshire Air Ambulance. The first person was recovered following a road accident and the iconic yellow helicopter landed a second time following a horse riding accident – a rescue which will feature in a later episode of Helicopter ER.

The dramatic efforts to save Helen’s life can be seen on Helicopter ER at 9pm on Monday, September 18, on Really.

The episode also features the story of two men who fell through the roof of a meat processing factory and a young girl who comes off her bike while competing in a motorcycle trials event.