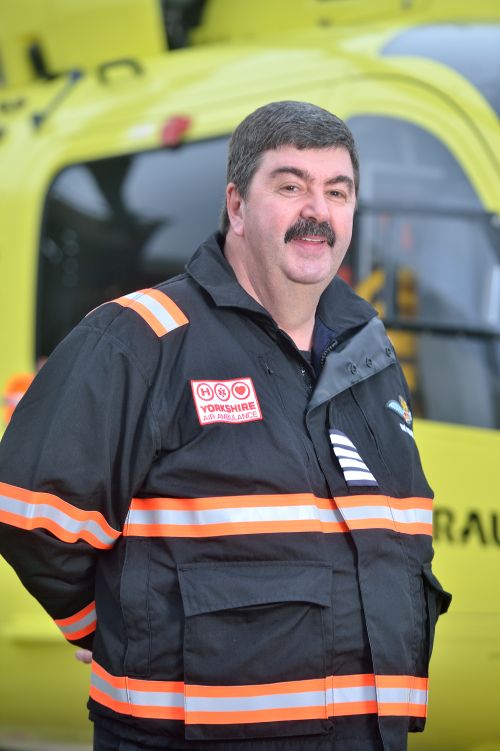 Pilot Ian Mousette has retired from Yorkshire Air Ambulance after a 39-year flying career which began and ended at RAF Topcliffe, near Thirsk.

Hull-born Ian always wanted to be in the army and joined the Junior Leaders Regiment at 16 with his sights firmly set on becoming a ground soldier.

But all that changed when he watched a recruitment film for the Army Air Corps. “I had never even considered flying before,” said Ian. “But I saw this film on how you could become a pilot in three years and that was it, I was hooked.”

There then followed a 24-year military career that saw Ian serve throughout the world – from the Falklands to Fiji, from Australia to Armagh.

He added: “At the age of 42 I had pretty much achieved everything I wanted to do in flying terms with the military, so I decided to complete my commercial licences and start a new chapter in my working life.”

Ian left the army in 1999 and, after working initially as a corporate pilot “flying rich and famous people about” spent eight years as a pilot for Police Aviation Services working with several police forces including Essex and South Yorkshire.

The 60-year-old became a Helicopter Emergency Medical Services pilot initially for the Lincolnshire and Notts Air Ambulance, before transferring to Yorkshire Air Ambulance (YAA) in 2012.

“I have been very, very fortunate that I’ve ended my flying career at Yorkshire Air Ambulance,” said the father-of-two. “It’s one of the most satisfying jobs in the world, although someone has got to be having a very bad day for me to get to do the thing I enjoy most.

“I have worked with some amazing people at the Yorkshire Air Ambulance and it’s been really rewarding to be part of an organisation that is always looking to provide the very best service for the people we serve.

“During my time I’ve been fortunate to have had the chance to fly the very latest aircraft – with the arrival of two, brand new Airbus H145s – which has been a really good challenge and enhanced the service’s night flying capabilities too.”

Over the last six years Ian has flown hundreds of times from the YAA’s northern air support unit at RAF Topcliffe, landing everywhere from isolated moorland to city streets, picking up patients of all ages with a wide range of serious injuries and medical problems.

“It never ceased to amaze me how much support the Air Ambulance gets from the people of Yorkshire,” added Ian, who is an aviation safety manager and NEBOSH qualified health and safety consultant.

“People regularly came up to me and offered to make donations. It was a real pleasure to go to work flying over the amazing landscapes of my home county every day and being part of a great team helping to save lives.

“I cherish the memory of a lady who, struggling to walk, came up to myself and a paramedic after we had landed at a job to thank us for previously airlifting her mother to hospital in bad weather.”

Captain Andy Lister, Director of Aviation at the YAA added “On behalf of everyone here, I’d like to wish Ian and his family all the very best for the future. Ian has been a much-valued member of our team for the last six years, and it was a privilege to fly and work with him.”