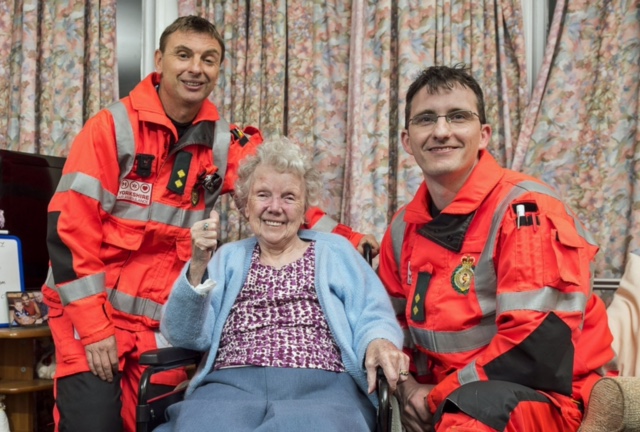 She was airlifted within minutes to Leeds General Infirmary where surgeons had to amputate her left leg below the knee. Her right leg was also badly damaged and Rose is now wheelchair bound.

“Until the accident Mum was completely independent and walked into Knaresborough most days,” said her daughter Maggie Maltby. “A lot of people know her, she’s a bit of a character.

“Doctors did not expect Mum to survive but after her second major operation they realised they were not dealing with a typical 94-year-old.

“She is just amazing but without Yorkshire Air Ambulance she would not be here. She needed surgery as soon as possible and a journey by land ambulance to Leeds would have taken around 45 minutes.

“The crew were brilliant and got her where she needed to be in minutes. We are just so grateful.”

Rose has six children, 12 grandchildren and nine great-grandchildren. Her large, close-knit family are now determined to raise as much money as possible for the rapid response emergency charity. They have set a target of £12,000 – the amount it costs every day to keep Yorkshire’s two air ambulances flying.

Maggie and two of Rose’s grandchildren, Ellie and Sarah Priest from Brighton, will be doing a sponsored skydive this weekend (February 27). The family are also planning to do the Three Peaks Challenge in April.

Maggie, 65, from Knaresborough, said: “The three of us are terrified about doing the jump but we want to raise as much money as possible. I think, as a family, the fundraising is really important as it ensures something good comes out of what has been such an horrendous time.”

Yorkshire Air Ambulance serves 5million people across Yorkshire and has carried more than 6,400 people in its 15-year history.

The latest generation Airbus H145 helicopters will be night capable and give paramedics a much more modern medical fit-out to treat and transport often critically injured patients.

To sponsor Maggie and her nieces on their skydive go to their JustGiving page www.justgiving.com/Ellie-Priest2