Family and friends complete 3 Peaks Challenge in memory of Georgie 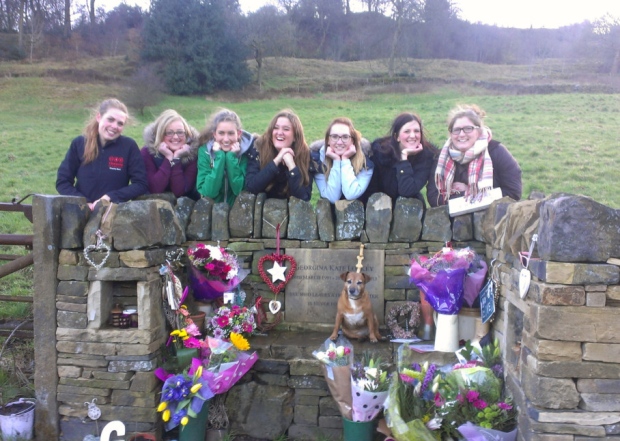 Family and friends of a 22-year-old girl, tragically killed after a horse riding accident, have raised nearly £10,000 for the Yorkshire Air Ambulance after a marathon mountain challenge.

Georgina Lockey, was flown by the rapid response emergency charity to Leeds General Infirmary after being thrown from her horse near the Shibden Mill Inn, Halifax, on August 18, 2013.

Despite the efforts of medical staff her brain damage was so severe, her parents made the heartbreaking decision to switch off her life support two days later.

Since her death Georgina’s family and friends have been fund raising for the Yorkshire Air Ambulance.

Cousin Laura Fairbank said: “Without the YAA’s speed, care and ability to reach Georgina in the remote rural location, she may not have been given the fighting chance in hospital.

“Her family may not have had the chance to say their goodbyes and for her to give life to others by becoming an organ donor.”

The 13 girls battled gale force winds, rain, hail and snow to complete the ascent of Whernside, Pen-y-ghent and Ingleborough in under 12 hours.

Annabel, 18, from Northowram, said: “Georgie loved walking and being outside and she would have loved to have done the Three Peaks Challenge.

“It was very very tough but we have just been amazed by how much support we’ve received. We originally aimed to raise £5,000 but have so far received almost twice that.”

On average the Yorkshire Air Ambulance attends over 1000 missions each year which is an average 3 missions every single day.

Since nursery nurse Georgina’s death, her family and friends have now raised over £20,000 for the YAA from a range of events including a fashion show, tea parties and 10K run.

Yorkshire Air Ambulance Regional Fundraising Manager Kerry Garner said: “Georgina’s family and friends are truly amazing. They have done so much for us since Georgina’s accident and we are incredibly grateful.”