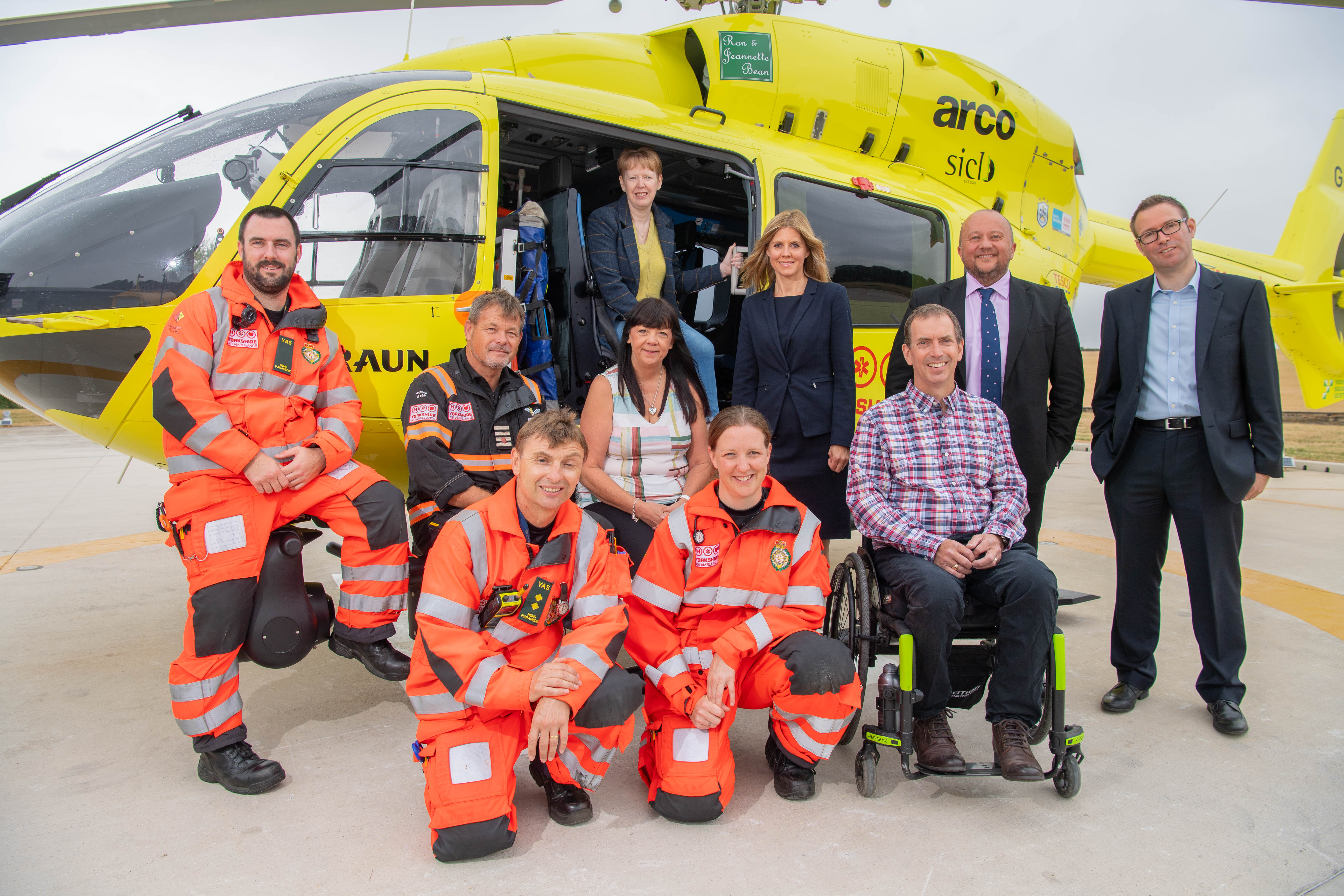 Adrian Hirst, was out on his motorbike with his wife Karen, riding pillion when they were hit by another vehicle.  The accident left him at the roadside with life-threatening injuries including a severed spinal cord, broken pelvis, hip, neck, shoulder, wrist and ribs as well as a bleed on his brain.  Karen was also badly injured in the accident.

On 11th March last year, it was the Critical Care Team from Yorkshire Air Ambulance who flew to Adrian and performed the hospital-level treatment on him which saved his life. The Team’s advanced life-saving treatment continued on-board the rapid helicopter transfer to hospital, effectively saving his life a second time.

Adrian said: ” If it wasn’t for the skill and dedication of the Yorkshire Air Ambulance team, I’m sure I wouldn’t be here today. They saved my life at the scene of my accident and then whisked me off to Leeds General Infirmary. During the 10-minute flight I slipped into a coma as my lungs collapsed, and so every second saved by the speed of the helicopter transfer, the equipment on-board and the skills of the paramedics were all vital as my life hung in the balance.”

Adrian, who worked for the Valuation Office Agency at the time of his accident, was joined by colleagues to launch a national fundraising partnership which will see the VOA’s 3,000 employees actively fundraising for all UK Air Ambulances via the Association of Air Ambulance Charity.

The VOA aims to raise around £50,000 nationally to support the work of the UK’s local air ambulance’s through a range of air-themed and other challenge events, office and social activities, payroll giving and much more.

Thomas Lindie commented: “It’s been an absolute privilege to attend today’s launch of the charity partnership between the VOA and the Association of Air Ambulances Charity. We’ve all seen, heard or read of the lifesaving services provided by air ambulances, but to attend this event with Adrian today really brings home just what an amazing service this is.”

Abby Barmby, Director of Marketing & Communications of Yorkshire Air Ambulance added: “We were absolutely delighted to welcome both Adrian and Karen to our Nostell Airbase to meet Chris, who was the Pilot who flew Adrian to hospital. We are very humbled that the VOA have now chosen to support the work of local air ambulance charities throughout the UK, including Yorkshire Air Ambulance. We were delighted to welcome everyone to Nostell to launch the partnership today.”

Adrian also added: “I remained in a coma for a month and am now in a wheelchair. However, I am recovering well from all my other injuries. Yorkshire Air Ambulance saved my life and I hope the national partnership between the Association of Air Ambulances Charity and the Valuation Office Agency can help save many more right across the UK.”