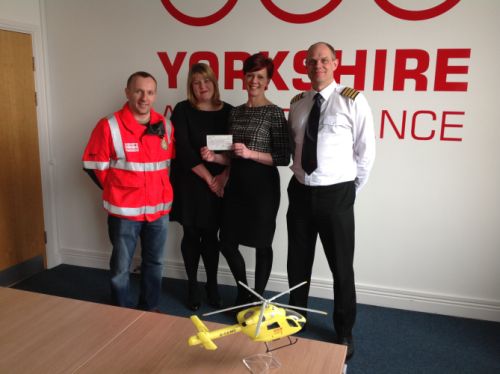 Huddersfield Insurance Brokers, Eastwood and Partners’ charity committee has raised £1,620 for Yorkshire Air Ambulance at their first ever ‘Corporate Quiz Evening’. This beat their target of £1,500 set before the event.

“It was a great evening and raised a fantastic sum for Yorkshire Air Ambulance. We’re really thankful that Eastwood and Partners chose our charity to focus this fundraising effort on, corporate support like this is invaluable and we look forward to many more successful events in the future.”

Vicky Shaw, Account Executive at Eastwood and Partners and quiz mistress on the evening commented:

“I was really pleased to see such a great turnout and I’m happy we were able to raise £1,620 for such a worthy cause. Hopefully this event will be even bigger

The new drive by the well-respected Huddersfield firm will see them organise and run various fund raising activities in 2014, with the Corporate Quiz Evening in aid of Yorkshire Air Ambulance becoming an annual event