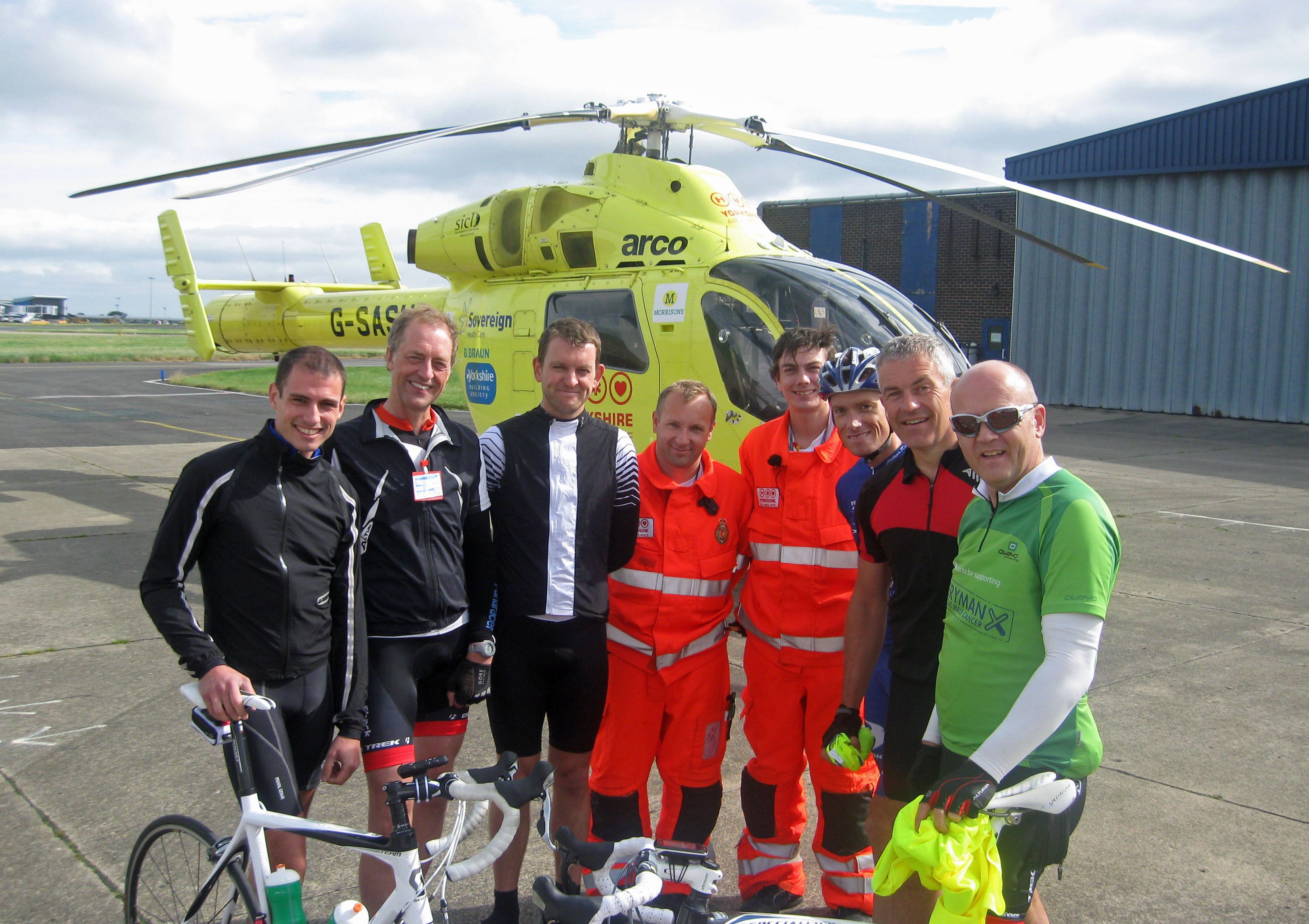 A group of cyclists have raised more than £105,000 for the charity that saved the life of their friend.

Nearly four years ago a training ride turned into a traumatic rescue after one cyclist was left fighting for his life with serious head injuries after he crashed into a wall.

Yorkshire Air Ambulance (YAA) paramedics were dispatched to the rural location near Harrogate and flew the badly injured man to Leeds General Infirmary within minutes – a journey that could have taken well over an hour by road.

Close friend Mike Rimmer from Otley said: “To this day it’s a mystery how the accident happened but what we do know is that the Air Ambulance saved our friend’s life and we wanted to do something to say thank-you.”

That ‘something’ was a pledge to raise £108,000 for the YAA – what it cost at that time to keep the rapid response emergency charity flying for a month.

In September 2012, Mike and a group of friends cycled across the Pyrenees in just five days – from the Atlantic to the Mediterranean coast. The truly epic 700km bike ride involved 12,000m of ascent and raised over £80,000 for the YAA.

He received a special supporter’s award for his super cycling fundraising team at the charity’s annual Recognition Awards in 2013. Kerry Garner, YAA Regional Fundraiser, said: “Mike organised ‘The Big Bike Ride’ across the Pyrenees which brought in over £80,000 – the most a single event has ever raised for us.

“He and his team are a true inspiration – doing all this for a friend we know is still recovering from what was an horrific accident. We cannot thank them enough.”

The big-hearted team cycled 1,000km around Corsica in just six days raising a further £25,299 for the Yorkshire Air Ambulance.

The 47-year-old, who runs a Lincolnshire-based vegetable processing business, said: “We’d obviously like to thank all our sponsors and those who donated to this great cause – in particular Kerry foods, Arla Foods and QV Foods.

“The Yorkshire Air Ambulance is a really professional, well run charity providing a vital service. We all hope never to need them but take comfort from knowing they are there.”

Mike and his team are still £3,000 short of their target and anyone who wants to donate can still do so at www.justgiving.com/Mike-Rimmer-abitofarideout or directly through the YAA at www.yaa.org.uk.

The YAA is an independent charity providing a rapid response emergency service to five million people across Yorkshire – England’s largest region. It now needs to raise £9,900 each day to keep its two helicopters flying.