↓ Skip to Main Content
Home / News / Cyclist gets back in the saddle and raises £1.3k for Yorkshire Air Ambulance after serious bike accident

Cyclist gets back in the saddle and raises £1.3k for Yorkshire Air Ambulance after serious bike accident 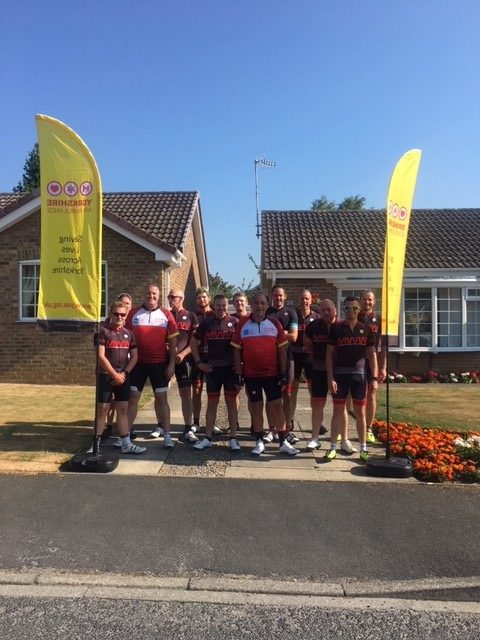 Cyclist Dave Jefferson has got back on this bike saddle a year after a serious cycling accident, and raised more than £1,300 for the Yorkshire Air Ambulance.

Just over a year ago, Dave, 54 from Market Weighton, suffered a bleed on the brain, a broken collar bone and ribs and burns to his shoulders and knees after a cycling accident near North Dalton.

The Yorkshire Air Ambulance airlifted Dave to Hull Royal Infirmary where he underwent intensive treatment and told that if it wasn’t for the air ambulance service and the fact that he was wearing a helmet, he possibly wouldn’t be here today.

As an avid cyclist, Dave regularly used the Strava app to monitor his progress and record his miles. The app was left switched on when he was taken by air from the scene of the accident to HRI, recording him travelling 154 miles.

The distance Dave allegedly travelled created a buzz within the Strava community and many people began asking him how he did it, unaware that he wasn’t actually cycling at the time, but in the back of an air ambulance helicopter.

To show support for the service that helped save his life and to give himself a challenge, Dave decided to replicate his journey via helicopter on land and cycle 154 miles to raise funds for the Yorkshire Air Ambulance.

Dave rallied around a team of 16 cyclists aged from 22 to 54 years old and travelled from Market Weighton to Malton and Flamborough Lighthouse, then back through Bridlington, to Driffield, Walkington, North Cave, arriving back at Market Weighton. The journey took ten and a half hours of cycling, starting at 5am and finishing at 6.30pm.

“I just wanted to think of some way to thank the crew and charity for what they did for me on the day I had my accident, and a bike ride sounded like the best idea”, said Dave.

“The charity is absolutely fantastic and you never know when you might need them. They are amazing people and what they do every single day is outstanding.”