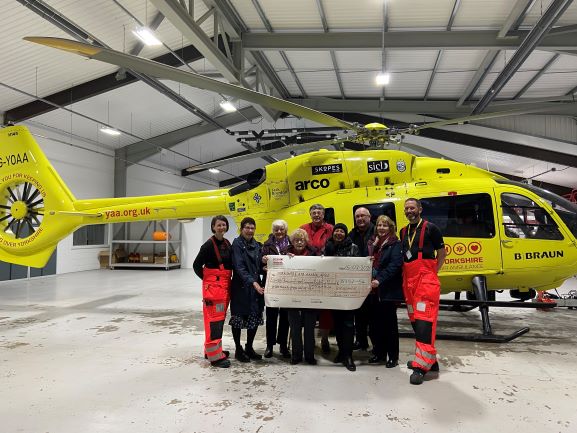 The Yorkshire Countrywomen’s Association presented a cheque of £18, 382.54 to the Yorkshire Air Ambulance, following a successful 10 months of fundraising by over 65 branches throughout Yorkshire.

The money has been raised by over 2000 members at events such as garden parties, mad hatters tea parties, wheelbarrow races and auctions amongst others. Glenys Rowe, member of the Forge Valley Branch, designed an Air Ambulance tapestry from which she has raised over £1500 by selling stitches to complete it.

Anita Taylor, YCA County Chairman, said: “Last year our ladies chose a worthwhile charity to support and as the YAA has come to so many people’s rescue, we decided it was time for us to help them out too.

“The members of the Yorkshire Countrywomen’s Association are a versatile bunch and have really enjoyed coming up with new ideas to raise funds whilst enjoying each other’s company.”

Anita Continued “Working with the YAA has been a great experience for us all. Not only have we raised such a fantastic sum but we have raised our membership number too with new ladies joining us every week after seeing how creative, crafty and community minded we are.”

Glenys Rowe, Chairman of the Homecrafts Committee, said: “I asked an artist friend to create an Air Ambulance design on a tapestry for me which I could sell stitches from. It has been a huge success and I’ve taken it everywhere from the regional shows in Yorkshire to the Goldwing Motorbike Light Parade in Scarborough, people are very interested in the tapestry and why we are doing it and it’s great to have a natter about it.”

The money raised will help tremendously towards the vital funding of the Yorkshire Air Ambulance and help us continue saving lives across the region.”