Councillor praises Yorkshire Air Ambulance after being airlifted to hospital 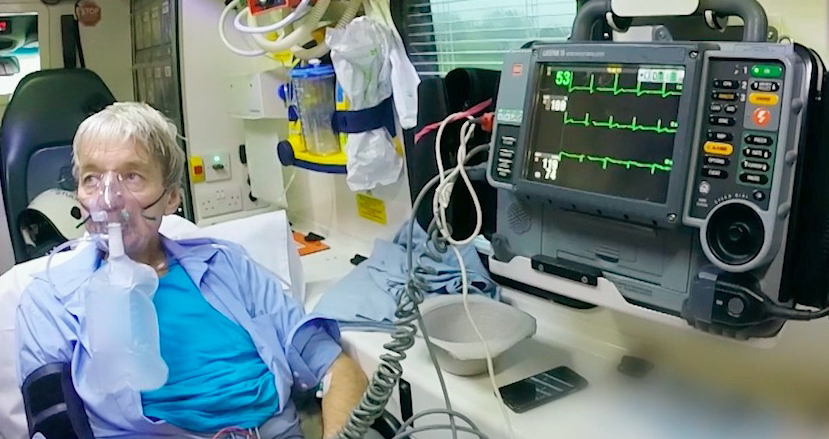 Cllr John Blackie, the Independent councilor for Upper Dales, was taken ill at his property management company in Hawes.

“I really felt very unwell indeed and a couple dropping off keys, who happened to be medical professionals, thought I might be having a heart attack,” said 68-year-old John.

John, who has already had heart bypass surgery and survived two bouts of cancer, was faced with a 60-mile journey by land ambulance to the nearest major trauma centre at the James Cook University Hospital in Middlesbrough.

Despite blustery weather conditions, Yorkshire Air Ambulance was dispatched to the remote Dales village and airlifted John to hospital in just 15 minutes.

“It was a very windy day but the pilot was prepared to risk it to get to me. We took off and although it was a bumpy ride we were at the hospital in just 15 minutes,” said John from Hardraw.

“The alternative would have been a journey by land of 60 miles on largely country roads. It is just one of so many examples of how important the service provided by the Yorkshire Air Ambulance is to the Upper Dales.”

As chair of the County Council’s Scrutiny of Health Committee for nine years from 2003, John was involved in the early development of the Yorkshire Air Ambulance.

He added: “It was almost ironic that having been such a strong advocate of the air ambulance that I should find myself in need of its service and I am just so very grateful that it is here.

“I represent an area which is the country’s most sparsely populated county council division covering 325 square miles and it is in the deeply rural communities within it where there is such an unbreakable bond with the Air Ambulance service, as it is an asset that we can never afford to lose.”

John, who has been a county councillor for 20 years, had not had a heart attack, but was found to be suffering from a twisted gut and later underwent successful corrective surgery.

His story can be seen in this week’s episode of Helicopter ER – the UKTV series that follows the life-saving work of Yorkshire Air Ambulance.

The programme also features a plumber who badly cut his arm with a Stanley knife and the dramatic rescue of a woman from a car that had careered off an icy road and plunged down a wooded ravine.