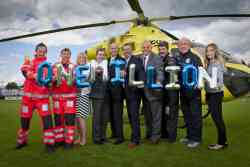 A ground-breaking fundraising partnership between Huddersfield Town Football Club (HTAFC) and the Yorkshire Air Ambulance (YAA) has raised over £1million.

The pioneering ‘Keep It Up’ campaign, was launched back in 2009 to help establish sustainable income for the Charity as well as supporting Huddersfield Town’s Youth Academy, which actively promotes the development of future football stars from the local community. Over the last five years, Huddersfield Town have driven the campaign through a series of high profile events including Walk for Pounds, Run for Pounds and the now infamous Pedal for Pounds cycle challenge.

The campaign was a first of its kind in the Football League and no one could have pre-empted how successful it would turn out.

Paul Gowland, YAA’s Director of Fundraising said “Five years ago when we launched the ‘Keep It Up’ campaign, we could never have predicted just how successful the partnership was going to be. It was new territory for both us and HTAFC – neither of us had ever been involved in a partnership like this before. We knew it would be a success, we didn’t quite realise just how successful!”

Paul continues “HTAFC have been fantastic at driving the campaign, however the success of it has been down to the fans getting behind ‘Keep It Up’ and showing their support. Their passion and dedication to the campaign over the last five years is amazing and they should all be commended for their continued support. We cannot thank them and the Club enough.”

“Huddersfield Town is committed to making a difference to the local community and there is no better example of the Club and its fans working together, alongside a charity with this goal than the ‘Keep It Up’ campaign.

“The Yorkshire Air Ambulance provides a vital service across our county and I’m delighted to report that the money generated for the charity through ‘Keep It Up’ has funded every life-saving flight the YAA has undertaken in a Huddersfield postcode since we launched this partnership in 2009.

“Keep It Up has also been of huge financial benefit to our Academy; the success of which is very important to the long-term sustainability of the Club.

“I would like to thank everyone who has contributed to make the Keep It Up campaign such a huge success, from the staff at Huddersfield Town and the YAA to all the cyclists, walkers, runners and every other person who has participated in an event or has made a donation.”

The monies have been raised through a series of successful events, including the annual ‘Pedal for Pounds’ bike rides which took hundreds of riders, hundreds of miles across the UK. The most recent ride saw nearly 300 cyclists embark on the ‘Chapman Trail’ cycling the 250 miles back to Huddersfield’s John Smith Stadium from Arsenal’s Emirates Stadium in London. Over the five ‘Pedal for Pounds’ rides, 635 different cyclists have taken part, covering a total of 1,250 miles and raising in excess of £700,000 to the ‘Keep It Up’ campaign.

The ‘Walk for Pounds’ events have also raised over £61,000 and the annual carol concert tipped the £5,000 mark. There have also been many fantastic fundraising events organised directly by the fans themselves which have included a running from Lands End to John O’Groats, football tournaments, balls and local collections.

Yorkshire Air Ambulance’s logo also appeared on the front of the team’s shirts during the 2009/10 football season, with the players wearing a special YAA red and yellow shirt during a home win over Southend United in January 2010.

The occasion was marked in style earlier today when one of the YAA’s helicopters made a visit to HTAFC’s training ground at PPG Canalside – the home of the HTAFC Academy.