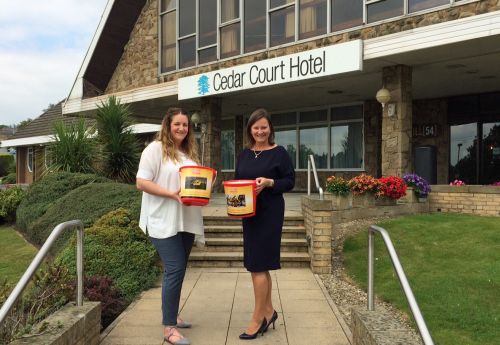 Yorkshire Air Ambulance has been selected as Cedar Court Hotels group’s charity partner for the year.

The rapid response emergency charity was voted for overwhelmingly by management and staff at Cedar Court’s four Yorkshire hotels based at Wakefield, Leeds/Bradford, Huddersfield/Halifax and Harrogate.

Tracey Ractliffe, Group Director of Sales & Marketing and lead on corporate responsibility, said: “Choosing Yorkshire Air Ambulance was an easy decision for us. It’s important to everyone to support a charity that’s based in Yorkshire saving lives across the county.

“We hope some of the money we raise will go towards the new state-of-the-art helicopters that are due to commence operations this year, and it will be pleasing to see these take to the skies in the knowledge that we have played a small part in getting them there.”

Staff have already embarked on ambitious plans to raise much needed funds through a range of activities from a sponsored cycle-thon at the Cedar Court Hotel Wakefield to donating 50% of the proceeds from the opening launch night of the Porterhouse Restaurant in Harrogate.

A pound will be raised for every Grill Combo sold at the Cedar Court Hotel’s Grill 54,  located between Huddersfield and Halifax, and a similar scheme will be in operation at the Leeds Bradford Hotel.

The Best Western Cedar Court Hotel Harrogate is also inviting guests to add £1 to their room bill and individual personnel throughout the company are getting involved in sponsored challenges.

Tracey Ractliffe added: “The Yorkshire Air Ambulance collection tins will be prominently positioned throughout the hotels and we sincerely hope that in addition to our other activities we can raise significant funds through loose change donations.”

The independent charity is currently replacing both its two ageing aircraft with the latest generation Airbus H145 helicopter.

The first of these becomes fully operational at the beginning of September following a full medical fit-out and crew training. A second H145 has been ordered from Airbus and will be in service by the end of the year.

The new aircraft – each costing £6m – offer exceptional flight performance and will have significantly lower operational and maintenance costs. The H145 is night capable, enabling longer flying hours, and is used by military, police and air rescue services throughout the world.

The purchase and fitting out costs have been met through planned savings, grants, careful budgeting and the amazing generosity of the people of Yorkshire.

Kerry Garner, Regional Fundraising Manager for Yorkshire Air Ambulance, said: “We are absolutely delighted that the Cedar Court Hotels in Yorkshire have chosen to adopt the YAA as their Charity of the Year.

“We are really looking forward to working with their staff and customers over the next year and supporting them with their fantastic fundraising initatives!  The YAA is an independent charity so we rely in individuals, groups and businesses such as the Cedar Court Hotels to help us raise the £12,000 we need each day to keep us flying.”